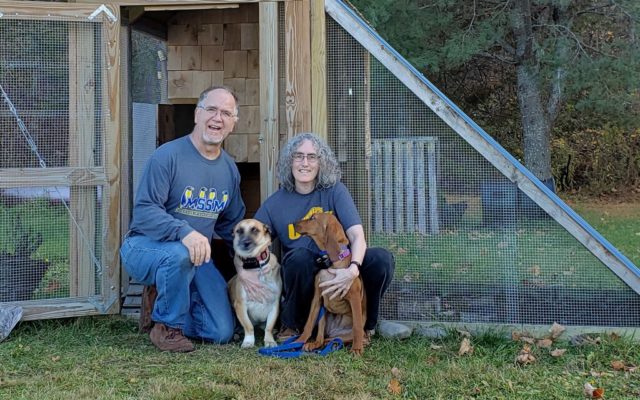 “Macho Chef: Recipes and Tales for Bold Cooks and The Folks Who Love Them” draws from the column Birden began writing nearly 20 years ago as a reporter for the St. John Valley Times.

“I like funny things and I like to cook so when I sat down to write ‘Macho Chef’ the character just kind of spilled out on the page and he did what he does,” Birden said. “I’ve been letting Macho Chef do his thing ever since.”

When Bangor Publishing Co. acquired Fiddlehead Focus in 2016, Birden became general manager of the BDN’s four Aroostook weeklies — the Times, the Aroostook Republican & News, The Star-Herald and the Houlton Pioneer Times — and websites fiddleheadfocus.com and thecounty.me, until he left the position last summer.

“The characters of the Chef family are certainly like my own family,” Birden said.

Birden is married to his wife of 24 years, Sofia Birden, who is associate director at the University of Maine at Fort Kent’s Blake Library.

The book is a compilation of Macho Chef columns, which contain semi-fictional stories accompanied by recipes, including such things as Romantic Shish Kabobs, Recycled Quesadillas and Home Heating Pretzels.

“For each of the recipes the title relates a little bit to the stories that I tell, but the stories hardly ever address the recipe itself,” Birden said.

Along with Sofia, the couple’s sons, Joshua, 23, and Christopher, 21, are also featured in some of the stories.

“Inspiration is drawn from [my family], but people shouldn’t think that the stories are 100 percent true because they certainly aren’t,” Birden added. “Some of the same things that happened to Chef happened to me, but the way he responds to them may not be the same or when they get out of hand may be not as out of hand as when something similar happened to me.”

The family pets also make an appearance in some of the stories.  In the column, “Only Bones Left to Pick BBQ Ribs,” Birden describes giving dog Fiona an old soup bone.

“She wagged her tail, and she looked at me like I was about to bestow on her an omelet made from Fabergé eggs,” Birden wrote.

“Then, just like she has in the past, she left it around the house for a barefoot middle-aged father to trip over it when he is stumbling around in the morning trying to assemble the first coffee of the day,” Birden wrote. “After I was done hopping on one foot and clutching the other bloody foot while I cursed the day I even considered owning a dog, I tossed it out in the yard where the dog can finally abandon it like an old beer bottle lying in wait for the lawnmower.”

Birden humorously describes the dog’s repeated attempts to bring the slimy old bone back into the house, much to the dismay of Mrs. Chef.

The story is followed by a recipe for baby back ribs.

“The thing that I love about Macho Chef is the way the community embraced that character, the way people would greet Sofia and call her Mrs. Chef and feel such sympathy for her because they thought she had to put up with this cantankerous, opinionated guy who cooks too much,” Andrew Birden said. “It  was just fun and always one of the most pleasant experiences to see people and hear about how they had read the latest Macho Chef column; I always loved that.”

In his free time, Birden enjoys writing, cooking, working on projects around the house, camping and spending time with his family.

“Macho Chef: Recipes and Tales for Bold Cooks and The Folks Who Love Them” — an independently published book — is available on Amazon via Kindle or paperback.

Post-tropical cyclone Teddy is expected to cross Nova Scotia today and skirt the western shores of Newfoundland. Maine will experience little moisture from the storm.
Our Sponsors END_OF_DOCUMENT_TOKEN_TO_BE_REPLACED