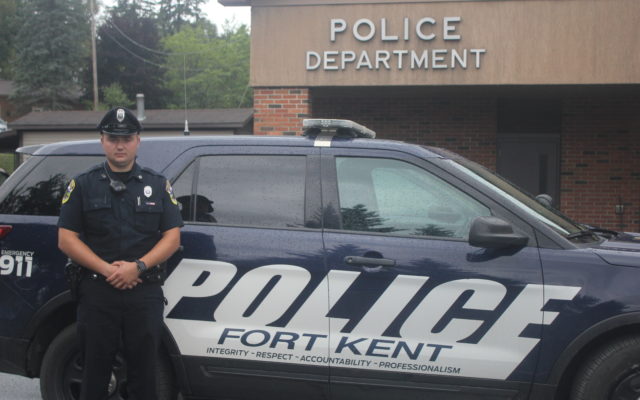 FORT KENT, Maine — There is a new police officer protecting and serving the community of Fort Kent.

“It’s great work, very satisfying work,” Jandreau said, adding that he feels his role as a police officer is to “keep everyone safe.”

A 2016 Fort Kent Community High School graduate, Jandreau said he has felt since middle school that he wanted to have a career in law enforcement. However, after high school, Jandreau’s path took him in a different direction.

He earned an applied science degree from Northern Maine Community College and worked as an oil burner technician at Daigle Oil Co.

“I did enjoy that a lot but this is more or less what I have wanted to do for a long time,” Jandreau said of becoming a police officer.

Jandreau became a volunteer firefighter with the Fort Kent Fire Department a year ago and said that experience reignited his desire to have a career in public service.

Initially planning to work part-time for FKPD, Jandreau said he enjoys public service so much he “decided to go all in,” once he learned the department was seeking a full-time officer.

“They’re happy for me that I was able to find something I enjoy doing and can help people at the same time,” Caleb Jandreau said.

“Caleb is a good addition to our team,” Chief Pelletier said. “He’s doing really well. He’s ambitious to be a law enforcement officer and in these trying times that is commendable.”

Jandreau lives in Fort Kent with his fiance, Autumn Bouchard, their two chocolate labs, Charlie and Gunner, and cats Piper and Ivy. In his free time he enjoys hunting, fishing, gardening, camping and traveling.

High pressure over western Québec will build into the Valley today and center over the region tonight. The ridge will move east of the region tomorrow with a low pressure area approaching from the west with a cold front.
Our Sponsors END_OF_DOCUMENT_TOKEN_TO_BE_REPLACED