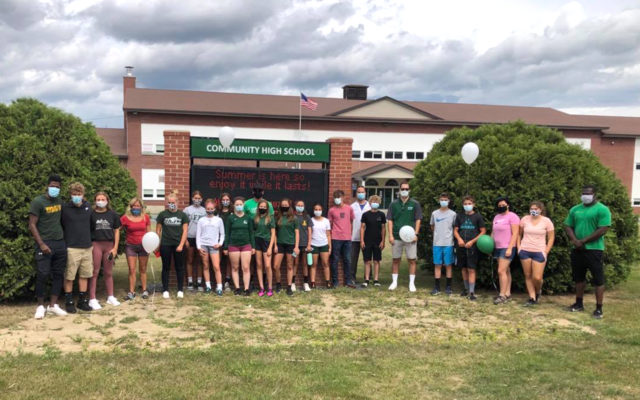 Madawaska Middle/High School senior Nevaeh McQuarrie, a center-midfielder and wing on the girls soccer team, was among the more than 25 people who attended the walk.

“I’ve played for Madawaska since my freshman year and I feel like I’ve gained a lot of strong friendships and everyone on our team is pretty close,” McQuarrie said. “When you love the sport and train hard at every practice is a real confidence booster and you can see yourself improving over the years.”

McQuarrie said she sees a disconnect in the logic of allowing students to attend school, but not allowing them to play school sports.

“When the school sent out surveys to our parents asking whether they wanted to send their child to school or homeschool them, I think the same thing should happen for sports,” McQuarrie said. “The risks are still there at school and on the field; I don’t understand why we could have a say in whether we go to school or not, but not for sports.

“I think if everybody plays their part and temperatures are taken before games, it should be up to the parents if they want to allow their child to play or not,” McQuarrie added.

Gabrielle Martin, a senior member of the 2019 Fort Kent Community High School girls soccer team, was unable to attend the walk, but said she too supports fall interscholastic sports.

“I desperately want to play soccer this fall,” Martin said. “Behind our soccer team there is an entire community helping with all the stuff behind the scenes, which makes our entire town part of the soccer team. It gives us all something to look forward to. Soccer brightens our community.

“It is one of the only things children have in rural communities to connect with friends in a great environment,” Martin added.

“The reason I am involved is for my children, all the children that need to connect with teammates and friends,” Martin said. “I feel the children gain all the same things from sports as they did in the past, friendship, competition, social networking, and an opportunity to do what they love.”

Some local sports fans are also in favor of a falls sports season, including Emery “Legs” Labbe, a retired sports writer and publisher for the St. John Valley Times and former principal and vice principal for SAD 27.

“If there was no sports season I would miss that very much,” Labbe said, adding that he would not be deterred by COVID-19 from attending sporting events. “I’m almost 90 and I’ll still be going,” he said.

The Maine Principals Association will decide on Thursday whether to approve interscholastic sports in the state, although school board members will have the final say on whether to go forward with the fall season.

At a Tuesday meeting of the SAD 27 board of directors, Superintendent of all three Valley Unified school administrative units, Ben Sirois, expressed his support for fall sports in the district.

“I thought it would probably be best if we are proactive in what the MPA is about to decide and have a Plan B ready in the event that the MPA does not want us to sponsor interscholastic activities,” Sirois said.

Sirois said he pitched the idea of a non-league sanctioned “Aroostook County League” to his colleagues at the Aroostook County superintendents, in the event the MPA does not approve fall interscholastic sports.

Another option would be a competitive E-sports program if it proves impossible for students to play in person.

“I think the overall theme is if if the MPA says move forward as a County with team sports, we’ll work within that framework and we’ll provide that, but if the MPA says ‘we advise not to have team sports,’ we think we can deliver on social distancing sports that still allow for some competition, and I think I think our kids deserve to have some kind of level of competition.”

Joseph E. BeckSpecial to the Fiddlehead Focus3 days ago

Short-Term Outlook: Wednesday - Friday Cloudy to mostly cloudy skies are expected over Fort Kent and surrounding areas today as a warm front lifts across the region producing some isolated shower activity.  A cold front will approach and cross the Valley tonight and early Thursday with gusty south/southwest winds developing ahead of the front thanks to the pressure gradient.
Our Sponsors END_OF_DOCUMENT_TOKEN_TO_BE_REPLACED