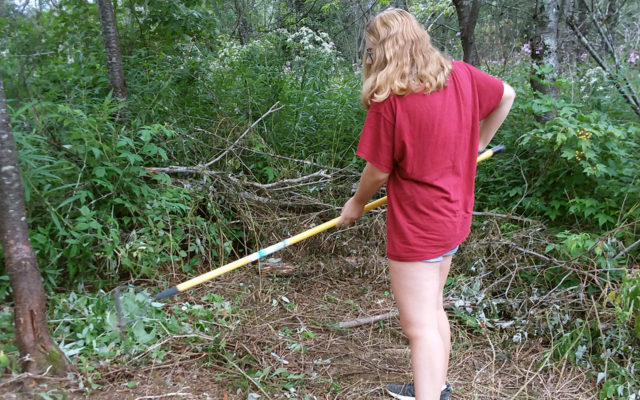 Morgan Mitchell • August 25, 2020
Thanks to an enterprising Girl Scout, Farm Brook Trails now offer a comfortable place to rest or adjust gear along the way.

MADAWASKA, Maine — Thanks to an enterprising Girl Scout, Farm Brook Trails now offer a comfortable place to rest or adjust gear along the way.

Chloe Ruest, 15, of Madawaska built two benches to add to the trail, thereby earning her Girl Scout Silver Award. She was recently honored by Girl Scouts of Maine at a “reimagined” G.I.R.L. celebration which took place online due to the pandemic.

As a Madawaska native, Ruest enjoys the trail system, which is used year-round for anything from hiking to snowshoeing. According to the Girl Scouts of Maine Silver Award page for Ruest, she often saw elderly people use the trails but have access issues as well as issues putting on snowshoes in the icy parking lot. 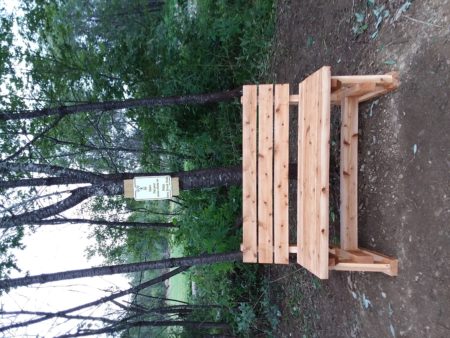 Visitors to Farm Brook Trails in Madawaska can now pause at this bench, one of two built by Girl Scout Chloe Ruest. (Courtesy of GIrl Scouts of Maine)

“I wanted to do this project because when people come to the trails, there was no place to sit and put on or take off their snowshoes. This was a safety issue for everyone and especially the older population,” Ruest said Tuesday. “The parking lot is very slippery at times, and the only way to put on their snowshoes was by holding on to their car.”

The Girl Scout Silver Award is Girl Scouting’s highest honor, and to complete the process, candidates must devise a project to better their community. The process includes a written application, a verbal interview and a background check.

After working with local hardware and lumber stores, Ruest came up with a bench design that took into account what materials and stains would hold up in the harsh Maine winters.

Ruest built the two benches at the start of and on the trail system to allow a place for people to put on their snowshoes or simply take a rest. 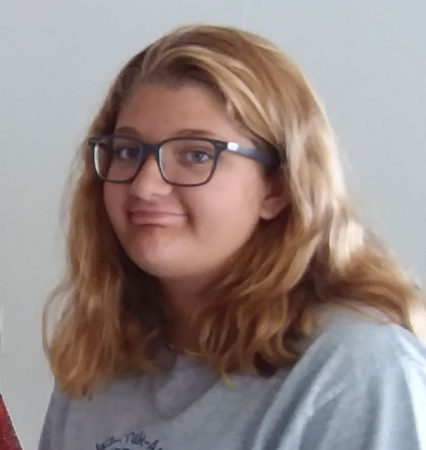 “I was happy that she could contribute to our trail system for all to enjoy while using the trails,” said Don Lavoie, owner of Farm Brook Trails. “It works out well due to the area providing a wilderness setting but is close to town.”

In order for Ruest to complete the process, and since the finished product would be placed on private land, Don Lavoie, owner of Farm Brook Trails, Lavoie had to go through all the legalities and join the Girl Scout organization himself.

Once the project was done, he said, the Girl Scouts asked to have a campout on the property.

Lavoie said. “I even let them use my side by side for the weekend in case there would be an emergency.”

Ruest was one of 21 girls in the state of Maine honored with her Silver Award, which the Girl Scout organization says “allows Girl Scout Cadettes to focus on an issue they care about, learn the facts, and take action to make a difference, while gaining the confidence and skills that will catapult them to lifelong success.”

Ruest is already seeing the worth of her project.

“I gave the snowshoers peace of mind and a safe place to put on and take off their snowshoes,” she said. “On any given weekend, you can see at least 20-30 people enjoying the snowshoe trails and using the bench.”

Joseph E. BeckSpecial to the Fiddlehead Focus7 days ago

Short-Term Outlook: Wednesday - Friday Cloudy to mostly cloudy skies are expected over Fort Kent and surrounding areas today as a warm front lifts across the region producing some isolated shower activity.  A cold front will approach and cross the Valley tonight and early Thursday with gusty south/southwest winds developing ahead of the front thanks to the pressure gradient.
Our Sponsors END_OF_DOCUMENT_TOKEN_TO_BE_REPLACED