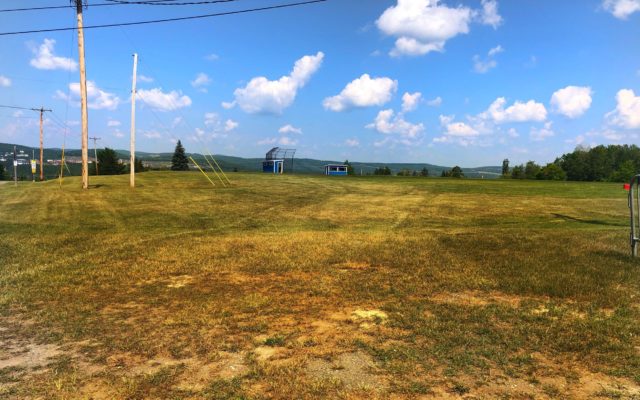 MADAWASKA, Maine — The Crown of Maine is in a D2 — or severe — drought status for the fifth week in a row.

The severe drought status is characterized by low moisture in the soil and lack of widespread rainfall, drying vegetation and low stream flows, according to the National Weather Service report.

Despite small amounts of rain in the Crown of Maine dropped by tropical storm Isaias, which tore through New England and barreled to the west of Maine, policy and planning coordinator for the office of the commissioner for the Maine Department of Agriculture, Conservation and Forestry Tom Gordon said results of the storm wouldn’t be on this report.

He said it would have little to no effect on The County’s drought status.

“Because of the westerly track of the storm, northern Maine didn’t see much rain,” Gordon said. 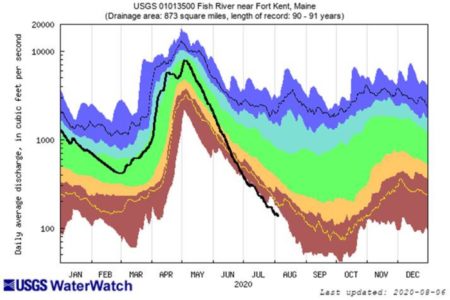 This graph shows the general history of stream flows. As the green represents the normal range, this year is marked by the black line and shows that it is well below average for July. (Courtesy of Nicholas Stasulis, Data Section Chief for the USGS New England Water Science Center Maine office)

From May 16 to Aug. 4, Caribou recorded the lowest total precipitation levels on record at only 4.87 inches, York said.

The ongoing drought will soon cause more hardships for farmers as those who irrigate may face long-term operation costs as well as reduce the water supply, Gordon said.

“Most of the larger farms irrigate and may be better able to withstand dry conditions; obviously, long-term operation of irrigation systems can be costly and reduce water supplies,” Gordon said.

While the office for the Maine Emergency Management Agency doesn’t have data for the period between 2000 and 2011 — including what York calls the “big drought of our generation” between 2001 and 2002 —  the groundwater for the Clayton Lake well, a U.S. Geological Survey water monitoring site in Aroostook County, is reporting its lowest levels for August on record.

York said that Tuesday will mark the start of week six in the severe drought status and York said that after eight consecutive weeks of that status several USDA programs become available to help farmers, ranchers and some small businesses.

“The forecasted conditions show warmer than average temperatures and normal to below normal precipitation for the next two weeks,” York said.

Post-tropical cyclone Teddy is expected to cross Nova Scotia today and skirt the western shores of Newfoundland. Maine will experience little moisture from the storm.
Our Sponsors END_OF_DOCUMENT_TOKEN_TO_BE_REPLACED