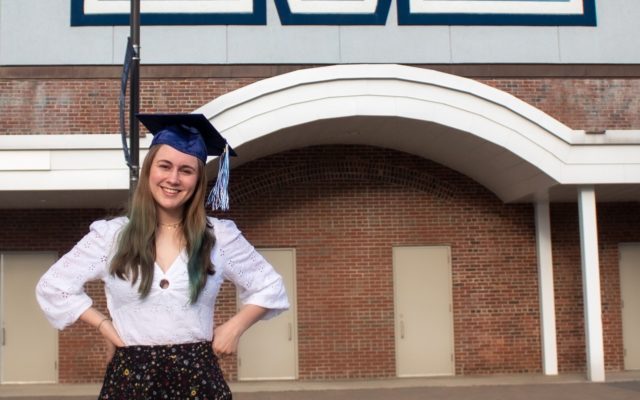 Morgan Mitchell • July 29, 2020
At only 22 years old, Madawaska native Elizabeth “Liz” Theriault is working up close and personal to help create climate awareness social media campaigns at the Maine Governor’s Office for Policy Innovation and the Future as the organization's climate communications intern.

MADAWASKA, Maine — At only 22 years old, Madawaska native Elizabeth “Liz” Theriault is working up close and personal to help create climate awareness social media campaigns at the Maine Governor’s Office for Policy Innovation and the Future as the organization’s climate communications intern.

Theriault’s position with the policy innovation office allows her to also work closely with the Maine Climate Council where she interacts with staff from the organizations to create content for their social media accounts that will engage the public.

Theriault moved to Madawaska as a child when her father Ken Theriault Jr. was offered the position of head librarian and historian at the Madawaska Public Library. In her youth, Theriault attended the Madawaska schools. By graduation, she landed herself the title of valedictorian.

Throughout her high school career, Theriault sought out opportunities in classes where she could express her love of writing and at one time, was even enrolled in three English classes simultaneously.

When she attended the University of Maine in Orono, she sought any opportunity she could engulf, which included three years as a student writer and media assistant at the Maine Established Program to Stimulate Competitive Research, a contributor and eventual editor of the opinion section for the university’s paper The Maine Campus, and worked for the Maine Scholars Strategy Network as its social media intern. She pursued a degree in journalism and political science.

“It was always clear to me that I was going to be a writer, and my desire to study politics came from my love for advocacy,” Theriault said. “I would say I developed that love from my parents, who never shied away from discussing politics at the dinner table, or anywhere else.”

In March, Theriault interviewed and got the position to be the climate communications intern for the Maine Governor’s Office for Policy Innovation and Future where she works closely with the Maine Climate Council.

As the intern, Theriault has helped staff from both organizations create engaging content including the most recent awareness campaign to bring light to climate change with the Summer Climate Series.

The Summer Climate Series consisted of six weeks in which the organization designated each week a different theme, such as transportation. For this, Theriault helped come up with daily Twitter posts that contained keywords and phrases that often trend on that specific weekday, such as #ThrowbackThursday.

The week of the transportation theme, Theriault helped come up with and post a photo of a “buckboard.”

“We posted a historical photo [on Twitter] of a “buckboard” in Maine,” Theriault said. “It was basically the original form of ‘carpooling’ where a large horse-drawn carriage would pick up travelers at train stations and bring them to their hotels or summer homes.”

“The Maine Climate Council really wants to have their finger on the pulse of Maine citizens’ opinions on climate action, and wants to hear from citizens across the state on what they believe is feasible and actionable,” Theriault said. “Basically, the outreach and engagement work we are doing on social media is helping to inform the public and point them toward the surveys so they can provide input for the Maine Climate Council to consider when making their final recommendations to the Legislature.”