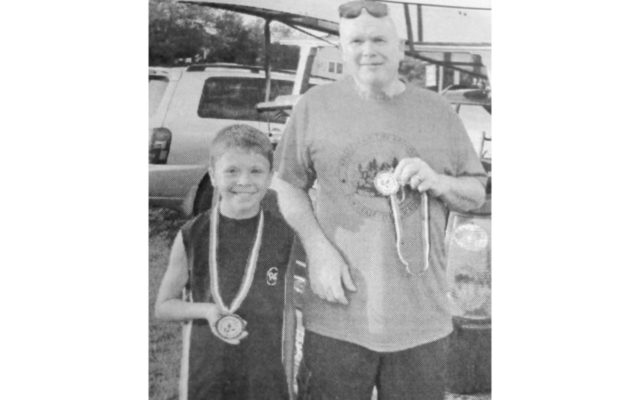 “Dear Mrs. Blanchette: On behalf of the people of the State of Maine, I congratulate you on reaching this magnificent milestone.” Born July 15, 1871, Mrs. Blanchette was also the oldest resident of the Security Home.

Hamlin immigration officer retires — Christopher Rogerson presented Harold Osgood a certificate of appreciation on the occasion of his retirement from the U.S. Immigration Service. Osgood’s retirement became effective July 31, 1970. Upon his retirement, Osgood plans to reside in Caribou.

Joyeux Noel — Mr. and Mrs. Santa Claus greeted enthusiastic crowds that sometimes surged to more than 2,000 visitors who attended the Grand Isle Homecoming 1995 Christmas in July celebration last weekend. The three-day event again proved to be a very popular attraction. There may not have been snow on the ground, but the spirit of Christmas was evident in the more than 50 homes decorated with a variety of Christmas displays and brightly lit trees. The event featured an amateur talent show, fireworks and music. Ms. Odette Levesque played Mrs. Claus, and Yvon Pelletier was dressed as Mr. Santa Claus. Homecoming 1995 Chairman was Dick Corbin.

Water tower 100 years old — The Frenchville water tower on Route 1 is celebrating its 100th birthday this year. Built in 1910 and put into operation in December of the same year, the water tower was constructed of redwood and had a capacity of 50,000 gallons. In its early days of use, the trains would stop at the tank for a “fill her up” pit stop. The train would carry food and commodities such as potatoes from the Valley and provide passenger service. By 1958, the diesel locomotive had replaced the steam iron house. The town purchased the tank from B&A railroad and used it as a water reservoir for the fire department that discontinued the use of the tank in 1981 and the water was drained.

A weak disturbance will drop down from the northwest tonight triggering some snow showers across Fort Kent and vicinity as it moves through with no significant accumulation expected.
Our Sponsors END_OF_DOCUMENT_TOKEN_TO_BE_REPLACED