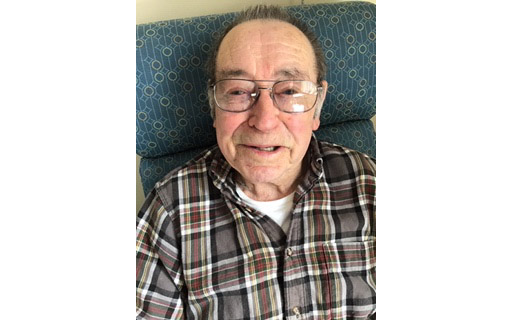 Contributed • July 20, 2020
Robert “Bob” Jandreau, originally of St. Francis and now a resident at Maine Veterans’ Homes in Caribou, has been named Veteran of the Month for June.

CARIBOU, Maine — Robert “Bob” Jandreau, originally of St. Francis and now a resident at Maine Veterans’ Homes in Caribou, has been named Veteran of the Month for June. Born and raised in St. Francis, Jandreau is the third child of 10 born to Hector and Rosebell Jandreau. He described his large family as hardworking, Catholic, French and very close to one another.

He said one fond memory he’ll never forget about growing up in Aroostook County is driving his father’s truck on the back roads, perched on his dad’s knee. The family kept a small farm where he also got to drive horses, a big job for a child.

Later, Jandreau was drafted into the Army. At first he said he found the atmosphere and the men intimidating during basic training in Breckinridge, Kentucky.

While serving in Korea, Jandreau was a truck driver and hauled cannons. He was also in charge of running the movie projector at his camp. Private First Class Jandreau made many good friends in the service and said certain memories will always stay with him, including one major regret — missing an appearance by Marilyn Monroe in a USO production for troops.

He said he remembers listening to a northern Maine radio personality, Dick Curless, who called himself “The Rice Paddy Ranger.” Curless also served in the Korean War.

After the military, Jandreau spent two years working for Whitney Chain and Manufacturing Company in Connecticut before returning home to St. Francis.

Upon his return, he married Norma Berube, and they have two children, Barbara and Leola. They also have one grandchild, Sarah.

Jandreau made a career back home transporting fruit and potatoes and driving a truck in Cyr Plantation hauling logs. When he wasn’t working, he would fish and hunt, play cards and garden.

He is a member of the Korean Veterans Association, VFW and American Legion.

In addition to serving his country, Jandreau added that he considers his greatest accomplishment to be overcoming health issues to continue to drive a truck at the age of 87.

High pressure over western Québec will build into the Valley today and center over the region tonight. The ridge will move east of the region tomorrow with a low pressure area approaching from the west with a cold front.
Our Sponsors END_OF_DOCUMENT_TOKEN_TO_BE_REPLACED