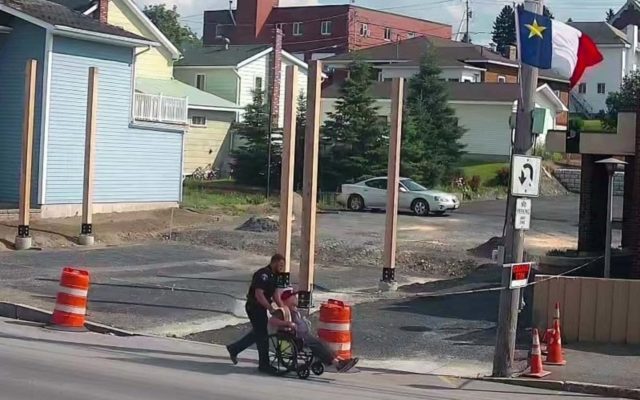 Morgan Mitchell • July 16, 2020
This was not the first time Albert sprang into action to go above and beyond.

MADAWASKA, Maine — Sergeant Garrett Albert of the Madawaska Police Department is being hailed as a hero for going above and beyond the call of duty when he helped wheel a man in a wheelchair across town all the way to the man’s house.

Albert said it was the end of his shift Friday afternoon and he went to fuel up the cruiser at DOC’s for the next shift’s officer when he saw traffic start to back up near the post office. When he looked closer, he saw a man in a wheelchair in the middle of the street.

“I was in a rush before an accident would occur due to traffic being stopped,” Albert said.

As the cruiser was filling up, Albert walked over to the scene where another man had wheeled the man to the side of the street. Albert said he recognized the man who informed the sergeant he was trying to get home and knew where he lived.

Albert rolled the man over to DOC’s, which was on the way to the man’s house.

“When I got there I asked if he wanted me to drive him home and he said ‘how am I supposed to get in the car?’” Albert recalled. “So we both kinda laughed and said good point. I decided to leave the cruiser at the gas station and push him because I knew the trip back was all uphill and would be a lot of work to return home.”

While the two made their way to the man’s residence, they chatted about many things, according to Albert.

“We talked about a lot of things including my family and specifically my grandfather who the gentleman remembered from years ago when my grandfather delivered bread for Country Kitchen,” Albert said.

This was not the first time Albert sprang into action to go above and beyond. In May of 2018, Albert assisted the ambulance service by busting down the door of a person who had gone into anaphylactic shock.

Most recently, Albert played a crucial role in retrieving the severed hand of a man who lost it in a logging accident but was successfully reattached.

“When I got him home after a pretty good workout pushing him uphill, he thanked me and was very appreciative,” Alber said. “It was just the right thing to do and I knew it would make a difference to him.”