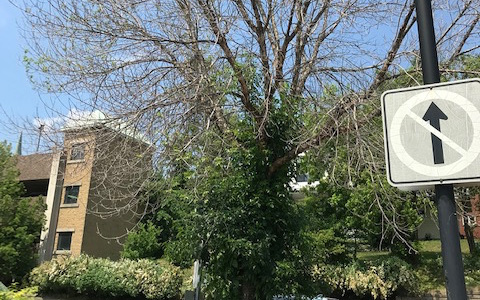 Contributed • July 9, 2020
EDMUNDSTON, New Brunswick — Due to the confirmed presence of emerald ash borer, 10 trees will have to be cut down along Saint-François Street in Edmundston, in front of the Border Services Agency office, over the next few days.

EDMUNDSTON, New Brunswick — Due to the confirmed presence of emerald ash borer, 10 trees will have to be cut down along Saint-François Street in Edmundston, in front of the Border Services Agency office, over the next few days.

Emerald Ash Borer (EAB) is an insect pest that has already killed millions of trees in North America. It was first detected in the Atlantic region, in Edmundston, in May 2018. It is now present throughout New Brunswick.

Unfortunately, once the damage caused by EAB is detected, the insect has already left and is making ravages elsewhere. The adult beetle bores a hole in the ash tree to lay its eggs. After the eggs hatch, the larvae live under the bark, quietly killing the tree.

“Once EAB was confirmed in 2018, we knew that our entire ash tree population was at risk. It’s very unfortunate, but it was inevitable. We will replace the ash trees with other hardwoods in the fall,” explained Alain Laplante, an urban forester with the City of Edmundston’s Public Works Department.

The 10 trees are clearly showing signs that they are being attacked by the EAB. They will be felled and destroyed since they have a dieback level above 30 percent.

These trees were planted by the city some 30 years ago.

Maine’s longest serving legislator, Martin was first elected to the Maine House of Representatives in 1964 when he was 23.
Our Sponsors END_OF_DOCUMENT_TOKEN_TO_BE_REPLACED