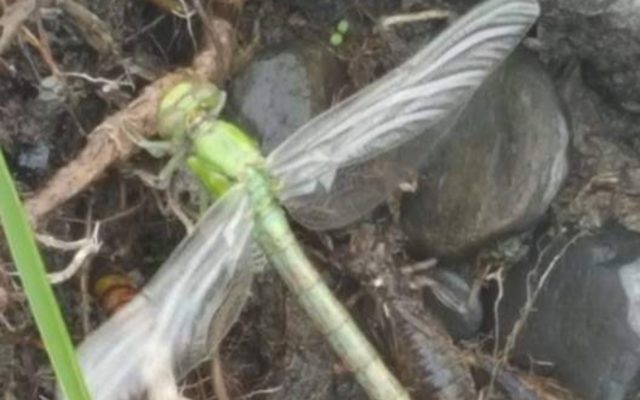 Morgan Mitchell • July 8, 2020
The Grand Isle boat landing has once again become the hotspot breeding ground for a rare species of dragonfly known to only be in three parts of Maine in June.

GRAND ISLE, Maine — The Grand Isle boat landing has once again become the hotspot breeding ground for a rare species of dragonfly known to only be in three parts of Maine in June.

The Ophiogomphus colubrinus or Boreal Snaketail, is an endangered dragonfly in the state of Maine and is known to be in the upper St. John River near the Grand Isle boat landing, the Penobscot River and the upper Saco River.

The bright green dragonfly begins its life cycle in the water where they burrow in the bottom of the stream for several years in the larval stage. After shedding their skin up to 15 times, the dragonfly finally undergoes metamorphosis and emerges as a winged adult.

The Boreal Snaketail is known to eat anything it can fit into its mouth including mosquitos and black flies.

“The [Boreal Snaketail] is among the most sensitive groups of aquatic insects to disturbances in water quality and therefore vulnerable to aquatic pollution, impoundment, riparian forest loss, stream bank erosionand excessive watershed development,” said Phillip deMaynadier, wildlife biologist with the Wildlife Research Assessment Section of the Maine Department of Inland Fisheries and Wildlife.

Because of their endangered status, it is illegal to collect, harass or kill the dragonflies. It is also illegal to mess with their sensitive habitat because it could “significantly disrupt normal behavior patterns,” according to deMaynadier.

The Snaketail was listed as threatened in 2007, making it third on the short list of endangered dragonflies in the state.

“The Maine Department of Inland Fisheries and Wildlife is committed to working with landowners, towns, land trusts and other conservation partners to ensure the survival of the Boreal Snaketail and recognizes the upper St. John River as a vital habitat for this and other priority fish and wildlife species,” deMaynadier said. “Collectively, we can secure a future for this fascinating animal as a member of Maine’s natural heritage.”

Dew points will drop back into the 50s by tonight creating less muggy conditions in the Valley.
Our Sponsors END_OF_DOCUMENT_TOKEN_TO_BE_REPLACED