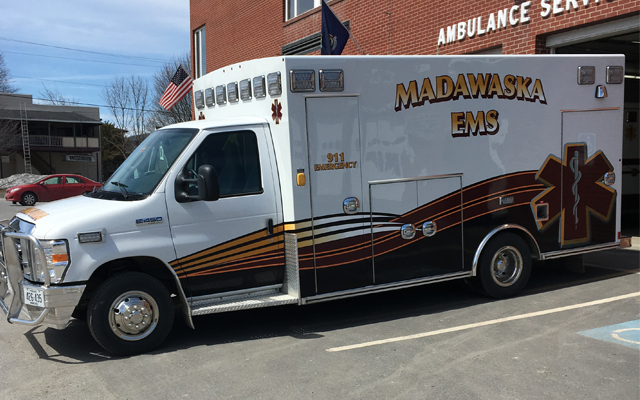 Morgan Mitchell • July 6, 2020
A Madawaska man has undergone successful surgery to reattach a hand lost during a June 30 logging accident.

MADAWASKA, Maine — A Madawaska man has undergone successful surgery to reattach a hand severed during a June 30 logging accident.

Don Deschaine was flown via LifeFlight helicopter to Boston on June 30 following a logging accident at the Madtown Logging plant in St. David that resulted in an amputation.

Around 11:10 a.m. that day, emergency services learned of the accident, and Sgt. Garrett Albert of the Madawaska Police Department saw the first ambulance take off from the safety complex while conducting a session on distracted driving.

Albert was informed through officer Sam Deschaine that an accident at the logging facility involving a wood splitter had resulted in a hand amputation. Madawaska Ambulance personnel rushed Deschaine to Northern Maine Medical Center.

Around 11:40 a.m., a second ambulance and fire emergency response were called to the scene to retrieve the severed hand, according to Albert.

Responders were not sure right away how to remove the hand from the wood splitter machine without causing further damage, Albert said. After studying the situation, Albert used a Halligan bar, or a heavy-duty crowbar, to pry the log free and release the hand.

An ambulance crew member rode with Albert to the hospital with the appendage. Deschaine was then flown to Boston, where he underwent surgery to attempt to reattach his hand.

Deschaine’s mother, Linda, reported on July 3 that the surgery was a success and the doctors were able to reattach the hand despite an additional surgery to restore circulation to one of the digits.

She said she was relieved and stated that her son “always takes care of me.”

Albert said the incident showed good multi-departmental teamwork among all the responders.

“Had it not been for the response of all three departments and the collaborative effort, the extremity would not have been salvageable,” he said.

A broad area of low pressure crossing the state will bring widespread rainfall to the entire SJV today and tonight. Rain tapers to showers Thursday morning with showers lingering into the evening hours as the low lifts to the northeast.
Our Sponsors END_OF_DOCUMENT_TOKEN_TO_BE_REPLACED