Jessica Potila, SJVT / FhF Staff Writer • July 1, 2020
It was not the slickest of getaways when an alleged television thief tossed a 55-inch flatscreen on his shoulder and strolled down Main Street on Monday, June 22.

FORT KENT, Maine — It was not the slickest of getaways when an alleged television thief tossed a 55-inch flatscreen on his shoulder and strolled down Main Street on Monday, June 22.

A passerby used a mobile phone to record the strange site of a man, later identified as Paul Langenbach of Fort Kent, carrying a giant television past the Gas and Go convenience store in downtown Fort Kent around 5:30 a.m. 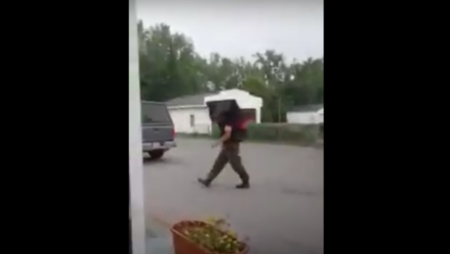 Langenbach allegedly walked at least 1.5 miles carrying the television on his shoulder, according to police. He allegedly stole the flatscreen from the Brookside Park apartment of a female acquaintance.

Earlier that morning, at 3:30 a.m. Fort Kent Police Chief Tom Pelletier responded to a report of a disturbance at the same apartment. The female reported to Pelletier that Langenbach and another man, John Michaud, 45, of St. Francis, had been guests at her apartment when a disagreement ensued and the men allegedly began damaging her apartment.

The men allegedly smashed several mirrors and threw some of the woman’s property out of a second story window, police said. The woman fled to a neighbor’s apartment where she called police. By the time Pelletier arrived the men were no longer at the scene.

Police charged Langenbach, 40, with burglary and theft. Michaud was charged with criminal mischief.

The television was later returned to its owner. Langenbach and Michaud will appear Monday, Sept. 11, at Fort Kent District Court.

Dew points will drop back into the 50s by tonight creating less muggy conditions in the Valley.
Our Sponsors END_OF_DOCUMENT_TOKEN_TO_BE_REPLACED