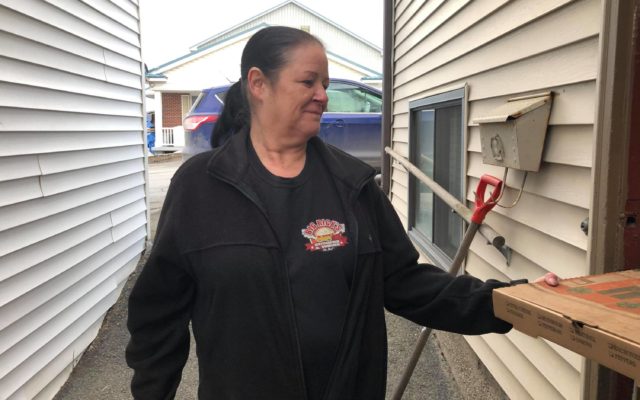 Morgan Mitchell • June 25, 2020
Big Rick’s Burgers and Wings in Madawaska received praise recently from state Sen. Troy Jackson for spearheading a project that has given away more than 550 pizzas to families in need in the Valley.

MADAWASKA, Maine — Big Rick’s Burgers and Wings in Madawaska received praise recently from state Sen. Troy Jackson for spearheading a project that has given away almost 600 pizzas to families in need in the Valley.

The crusade to assist those struggling with the initial shutdown that COVID-19 brought began after Ricky Nadeau, owner of Big Rick’s, heard from a college buddy who wanted to pay it forward by funding $100 worth of pizzas to be given to members of the community.

Nadeau thanked his college friend and made a post on Facebook about his generosity. He decided to stretch the money as far as it would go and produced large one-topping pizzas — 10 to be exact — with the money that his friend donated, and put them up for grabs for whoever would come forward and ask for a pizza.

The movement skyrocketed from that point until Big Rick’s had delivered 584 pizzas across the Valley — all funded by donations from people throughout the country. A total of $5,950 was donated in amounts from $10 to $100.

Sen. Troy Jackson wrote a letter praising the restaurant establishment for its “creative solutions” in helping the community.

“Big Rick’s [Burgers and Wings] didn’t do this for recognition, but was pleased and impressed to receive a letter like this thanking them for the good deed,” Nadeau said Monday.

A cold/occluded front will approach from the Great Lakes today with showers likely this afternoon along with a chance for thunderstorms.
Campaign Corner END_OF_DOCUMENT_TOKEN_TO_BE_REPLACED

Dale Crafts filed his nomination papers for Feb. 21 with the Secretary of State to officially be placed on the primary ballot on June 9, 2020, for the U.S. House of Representatives 2nd District race.
Our Sponsors END_OF_DOCUMENT_TOKEN_TO_BE_REPLACED