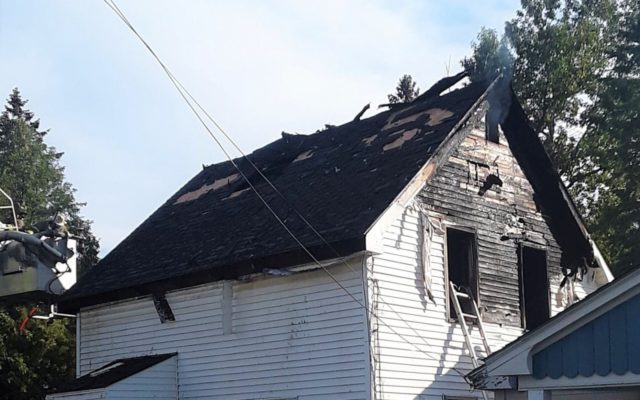 FORT KENT, Maine — A neighbor who dialed 911 when she saw a fire at a Hall Street home on Wednesday afternoon is being credited with saving the life of a homeowner.

Chelsea Dionne, 27, of Fort Kent was returning home with her children from a swimming expedition when she said she noticed smoke rolling from an upstairs window of a Hall Street residence. Dionne immediately called for assistance and helped the homeowner, Shelley Bruey, from the porch of the residence to a safer place in the yard.

The fire started on the second floor of the home and extended into the attic, according to Fort Kent Fire Chief Ed Endee.

No injuries were reported.

Fort Kent firefighters knocked out the blaze within 20 minutes of their arrival.  However, the firefighters were on scene for much longer as they put out smaller areas of fire and checked for hidden spots of fire throughout the structure.

Chief Endee said the home was severely damaged, but was likely not a total loss.

The cause of the fire remains under investigation. North Lakes Fire and Rescue provided mutual aid by covering the Fort Kent station during the fire.

A warm front will lift across the SJV this Wednesday with overrunning snowfall likely over the course of the day, with Fort Kent and vicinity receiving accumulations around 2 to 4 inches.
Our Sponsors END_OF_DOCUMENT_TOKEN_TO_BE_REPLACED