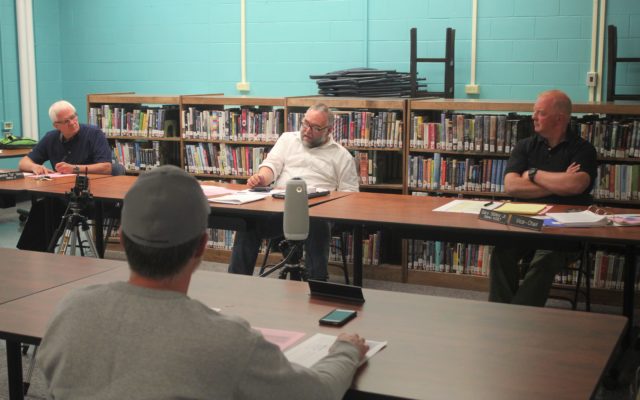 FORT KENT, Maine — Maine Department of Education Commissioner Pender Makin expressed surprise that SAD 27 board members agreed to relinquish a majority vote in Valley Unified, according to SAD 27 subcommittee members who met with the commissioner.

SAD 27, along with SAD 33 and Madawaska School Department, have joined together to form the Valley Unified Education Service Center, which aims to build a regional grades seven-12 school in the St. John Valley to address declining enrollment and rising costs in education. In 2018, the state authorized funding the Valley Unified effort up to $100 million for the new school building.

SAD 27 board members Toby Jandreau, Sarah Ashley and Gary Sibley Jr. comprised the subcommittee that met with Makin and deputy commissioner Dan Chuhta in March. Facilities director for the DOE, Scott Brown, attended a portion of the one-hour meeting.

Jandreau shared information about the subcommittee’s meeting with DOE members at a June 4 meeting of the SAD 27 Board of Directors.

Jandreau said that Makin expressed surprise that SAD 27 chose to give up the majority vote in Valley Unified, since it is paying 51 percent of the expenses. SAD 27 has 33 percent of the vote. Jandreau said Makin told the subcommittee she thought that was “curious.”

In a June 15 email, a DOE representative said that neither Makin nor Chuhta “recollects one way or the other” whether Makin expressed surprise about the disparity between the district’s vote weight and expenses burden at the March meeting.

The Valley Unified school regionalization process has been under a cloud of controversy since a site selection committee voted in November to approve a Frenchville site for the proposed regional school.

The 17-member committee reviewed a site selection matrix that favored the Frenchville site by three points over a Fort Kent site. Engineering firm WBRC oversaw the site selection process, including the development of the matrix used to score the sites.

SAD 27 schools are located in Fort Kent, while Frenchville falls in the SAD 33 district.

In the letter, Theriault said he lacked confidence in the matrix used to select the site and that he felt rushed and pressured by WBRC, VU administrators, and his fellow site selection committee members to vote in favor of the Frenchville site.

Nevertheless, the Valley Unified Board of Directors in December ratified the recommendation of the site selection committee with a vote of 7-2.

A group of Fort Kent residents in January filed a complaint in Aroostook County Superior Court in Caribou asking a judge to put a temporary stop to the school consolidation process.

Later in January, the VU board voted off the administrators who sat on the board during the site selection process, including Kaleta, citing a conflict of interest.

In February, the issue went to a non-binding straw poll which asked voters in all three school administrative units the question: “Are you in favor of the Frenchville 3A/3B site as the location for the proposed Valley Unified Regional School?”

The Fort Kent Town Council in February requested information from Commissioner Makin as to what the town would have to do to withdraw from SAD 27. The council has yet to take formal action regarding the issue.

The school consolidation effort has been at a standstill since the COVID-19 pandemic halted many government operations in the state beginning in late March.

The VUCC lawsuit was also halted in March, when Maine Superior Court Justice Harold Stewart granted a motion on behalf of the plaintiffs to stay the legal proceedings “pending the conclusion of the RSU formation process.”

In his March 26 ruling, Stewart said that the plaintiff’s requests for relief “may be rendered moot as a result of how the process regarding the formation of an RSU is concluded.”

The Valley Unified school administrative units will need to agree to form a Regional School Unit to govern the new school if the school consolidation process is to move forward.

“Ultimately, nothing moves unless we join an RSU,” Jandreau said.

Jandreau added that with an RSU, according to Maine law, there needs to be proportional voting.

But it will take some time to form an RSU, Jandreau said. In the meantime, disproportionate voting by SAD 27 members on the VU board will remain, all while decisions regarding the new school take place.

Jandreau proposed that he and Sibley share the board’s concerns regarding disproportionate voting with a newly enacted think tank — led by Superintendent and Valley Unified Executive Director Ben Sirois and designed to bring the three SAU’s together to discuss the school consolidation process.

The think tank met for the first time on Tuesday, June 9.

Jandreau and Sibley Jr. will share the results of the think tank discussion at the next SAD 27 Board of Directors meeting to take place at 6 p.m. Monday, June 15, at Fort Kent Community High School library.

Members of the public can also watch the meeting online, and ask questions during the public participation period, by accessing this link: https://bit.ly/MrSiroisYouTube.

High pressure over western Québec will build into the Valley today and center over the region tonight. The ridge will move east of the region tomorrow with a low pressure area approaching from the west with a cold front.
Our Sponsors END_OF_DOCUMENT_TOKEN_TO_BE_REPLACED