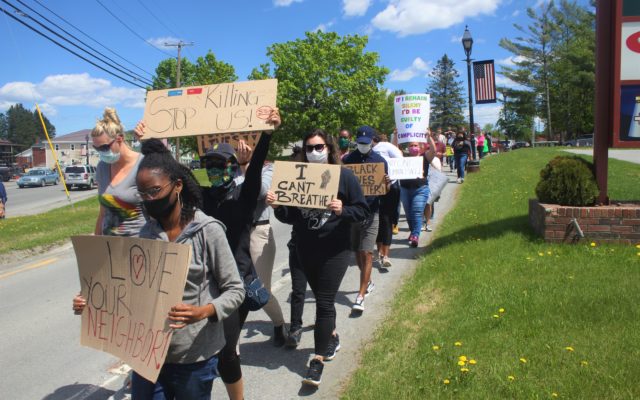 Jessica Potila, SJVT / FhF Staff Writer • June 4, 2020
About 50 people attended a peaceful gathering in Fort Kent on Wednesday to honor the memory of George Floyd and other black men who have been killed by police officers, and to promote equality and unity among the races.

|
FORT KENT, Maine — About 50 people attended a peaceful gathering in Fort Kent on Wednesday to honor the memory of George Floyd and other black men who have been killed by police officers, and to promote equality and unity among the races.

Floyd, 46, died May 25 on a Minneapolis street when Police Officer Derek Chauvin kneeled on his neck for more than 8 minutes during an arrest.

In the days since Floyd died, peaceful protests and violent riots have taken place throughout the country, demanding justice for Floyd and systemic reforms regarding race relations in the United States. 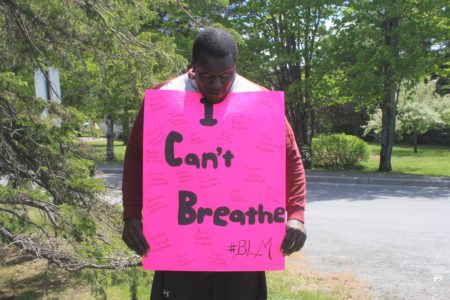 Ricardo Whitely of Fort Kent attended a “United We Stand, Divided We Fall” event in Fort Kent on Wednesday where he held a sign listing the names of black people who have been murdered in police custody. Staff Photo/Jessica Potila

Jennifer Schlott-Green, 41, who describes herself as “multiracial,” organized the “United We Stand, Divided We Fall” event that took place Wednesday at the Fort Kent Public Library.

Schlott-Green spoke to the group on the library lawn.

“You leave outside of Fort Kent and the world is different,” she said. “We all need to be aware of what’s going on in the world. I’ve got kids. They need to know that this is wrong and it needs to be fixed.”

Among those who attended the gathering were many international students from the University of Maine at Fort Kent, including Ariel Celik, 27, who is originally from St. Kitts.

Celik said she is thankful to live in Fort Kent where she said police treat people of color with respect.

“The cops here, they’re like your neighbors you know,” she said. “We have support from the police here and it’s peaceful.”

Celik said the death of George Floyd and the protests that followed have proven an eye opening experience for her in terms of learning where others stand regarding the issue of racial inequality.

“Now with George Floyd and all of this coming out you’re able to see some of the ideals your neighbors have,” she said. “Some of the people I thought I knew, they don’t support Black Lives Matter.”

“I guess I wanted to let people know that it is important to be an ally, that we have to work together to bring about change,” Collings said. “I have really been struggling with the fact that after 50-plus years of activism we are still at this point. It is heartbreaking.” 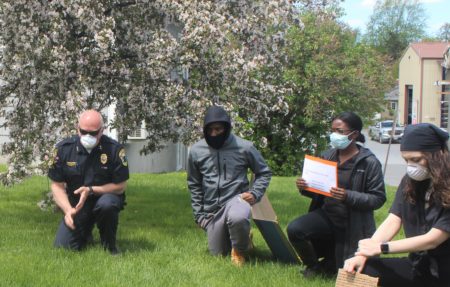 The group, including Chief Tom Pelletier, took a knee in memory of Floyd before walking to the Fort Kent Police station, escorted by the police chief. Some drivers honked their car horns in solidarity with the group.

“This is what it should be. This is what it’s all about, not bricks and bombs and guns,” Chief Pelletier said. “You are certainly making your point.”

Chief Pelletier added that he agrees 100 percent with what the group stands for.

“Good cops do not condone the bad actions of bad cops,” he said.

“All of our international students are very welcome in our community. They are part of our community,” Pelletier added. “We want to make sure they feel comfortable and safe and I will make sure of that. That is my promise to you all.”

Celik said she feels it is important for people of different backgrounds to make an effort to get to know one another.

“They need to see other people’s cultures so they can understand — just understand,” she said.