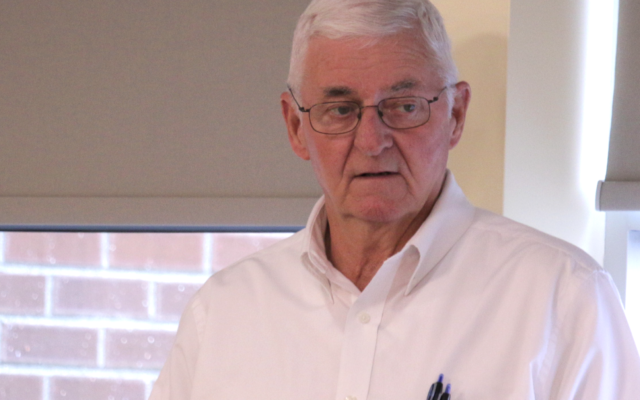 David Marino Jr. • June 4, 2020
Incumbent Sen. Michael Carpenter and Rep. Harold “Trey” Stewart III, R-Presque Isle, are the expected nominees for their respective parties in this year’s election for a two-year term in District 2 of the Maine State Senate.

PRESQUE ISLE, Maine — Sen. Michael Carpenter, D-Houlton, has fought many political battles in his life. And he’s more than ready to fight his next against a popular member of Maine House leadership.

Incumbent Carpenter and Rep. Harold “Trey” Stewart III, R-Presque Isle, are the expected nominees for their respective parties in this year’s election for a two-year term in District 2 of the Maine State Senate.

The race for the Senate seat, which encompasses southern and central Aroostook County and parts of northern Penobscot County, will occur in conjunction with the 2020 Presidential Election on Nov. 3.

It’s shaping up to be one of the tightest contests across The County, but the race also has statewide implications. As one of Maine’s closest Senate races in 2018, District 2 will be an urgent election to win for the Maine Republicans if they want to regain control of the state Senate.

Carpenter said that his district was “clearly” a conservative, Republican-leaning district. Indeed, all of the races Carpenter has run in recent years have been close. In 2014, he lost to former state Rep. Michael Willette by 232 votes. In 2016, he bested Rep. Ricky Long by 886 votes. And 2018 saw him beating businesswoman Karen Reynolds by 207 votes.

Yet Carpenter is confident that his record and the issues he had fought for in and out of Augusta would help propel him to victory.

In terms of policy, he said he was especially proud of his work on veterans’ issues, health care, reforming the courts as Senate Judiciary chair and ensuring that rural County interests have a voice at the statehouse.

Owing to his many years in politics — including previous stints in the statehouse and as Maine Attorney General — Carpenter has a personal story many know.

He grew up on a farm in the Houlton area, leaving his rural upbringing to serve as a U.S. Army combat officer in the Vietnam War. Upon returning, he entered a career in law, mainly focusing on child protective cases — he said he currently had 130 children on his caseload.

Carpenter also holds the distinction of being one of the few Aroostook County politicians to achieve statewide office in Maine. When he became Maine Attorney General in 1991, he was only the third in the state’s history to reside north of Bangor and the first since 1921.

While Carpenter is a familiar commodity in The County, he said that Stewart — a 26-year-old two-term Maine House member who is one of the youngest members of state legislative leadership in the nation as Assistant House Republican Leader of the Maine House — is more “well known” than previous Republican challengers.

Carpenter said Stewart is his “opponent, not his enemy.” Stewart partially agreed but said that he isn’t “running against” Sen. Carpenter, as much as he is running to create a better future for The County.

While both candidates want to retain civility in the race, each said they had substantial policy differences with the other. Carpenter said his political differences with Stewart were especially explicit on economic issues like minimum wage and health care.

For example, Carpenter supported the expansion of MaineCare — approved by voters in Maine Question 2 in 2017 but not instituted until Gov. Janet Mills took office in 2019. He lauded the initiative, pointing out that it had provided health care to more than 3,000 County residents who wouldn’t have been able to afford health care otherwise.

Stewart said he did not believe that the expansion was in the state’s best interest, arguing that health care bought on the private exchange was more effective than that run by the government. He also said his Presque Isle district did not support the expansion — 54 percent of The County voted to reject expanding Medicaid in 2017.

One issue that both Stewart and Carpenter see as worth addressing is the population exodus that has occurred from The County in recent years. U.S. Census numbers show the population decreasing by nearly 20,000 since 1980.

“There’s a natural tendency to try your wings and to get out and check out the bright lights of the city,” Carpenter said. “But, we want those people to come home.”

He said the best way to ensure that young and middle-age people stay in The County is to make it “enticing” to stay, with a high quality of life, good-paying jobs and a focus on education — especially technical education.

While the senator said the COVID-19 pandemic would decrease campaign events, he still hoped to debate Stewart. He suggested a series of debates in high schools across the district.

Stewart said he would attend any debate he was invited to, but that in-person debates might be untenable based on the trajectory of COVID-19. Both candidates said they were open to remote debates if in-person ones were not possible.

As he gears up to participate in a race that will be competitive and possibly contentious, Carpenter said he continues to be driven by his love of public service. Growing up in a rural lifestyle with “few opportunities,” he hopes to make a difference for those across his district.

“My state and my country have been very good to me,” Carpenter said. “I feel the need to give back.”

Cloudiness in the region Thursday afternoon along with a slight chance for isolated showers Thursday night and Friday.
Crown Politics END_OF_DOCUMENT_TOKEN_TO_BE_REPLACED