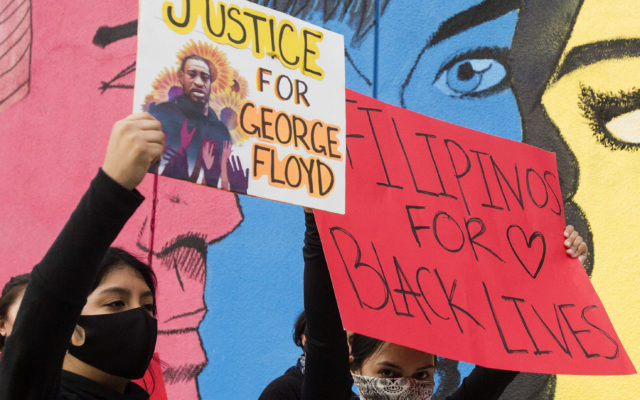 Jessica Potila, SJVT / FhF Staff Writer • June 2, 2020
A peaceful gathering is planned in Fort Kent to unite people in the aftermath of the killing of a black man who died on a Minneapolis street while police arrested him.

FORT KENT, Maine — A peaceful gathering is planned in Fort Kent to unite people in the aftermath of the killing of a black man who died on a Minneapolis street while police arrested him.

George Floyd, 46, died while Minneapolis Police Officer Derek Chauvin kneeled on his neck for more than 8 minutes during the May 25 arrest. Multiple passersby recorded the incident on their cell phones and pleaded with officers, including Chauvin, to release Floyd, who complained that he could not breathe.

Chauvin has since been arrested on charges of third degree murder and second degree manslaughter in relation to Floyd’s death.

In the days since Floyd died, peaceful protests and deadly riots have taken place throughout the country, demanding justice for Floyd and systemic reforms regarding race relations in the United States.

Jennifer Schlott-Green, 41, who describes herself as “multiracial,” has organized a “United We Stand, Divided We Fall” event to take place at noon Wednesday at the Fort Kent Public Library.

“My brother and nephews, while multiracial, could be the next George Floyd,” Schlott-Green said.

Schott-Green said this is not her only reason for planning the event.

“I am personally sickened that any one person thinks they are better than anyone else to the point of taking a life, especially when that person is in a position of power,” she said. “Change is long overdue.”

The mother of three biological daughters, 20, 17 and 15, a stepson, 8, and a 16-year-old foster son, Schlott-Green said she also wants the event to be a learning experience for her children.

Schlott- Green grew up in Virginia Beach, Virginia, and has lived in the St. John Valley for 12 years. She said she is a “proud” Fort Kent resident.

“It is an amazing place and I wouldn’t want to be anywhere else at this moment,” Schlott-Green said. “However, just because we are not experiencing the effects of what is happening around the U.S. with the riots and looting, I feel it is important to show understanding, compassion and support of the need for change — the need for equality for people regardless of their skin color or ethnicity. Even if we aren’t experiencing discrimination ourselves, we have a responsibility as Americans to be educated and exercise our rights to be treated equally.”

“We are all human,” Schlott Green added. “There is one race, the human race, and we are killing ourselves.”

The “United We Stand, Divided We Fall” event is about more than race relations, Schlott-Green said.

“There is too much focus on Democrat and Republican. We are all Americans,” Schlott-Green said. “One thing the riots/protests have visually shown everyone is it is a mixture of whites, blacks, Latinos, democrats, republicans, old and young. They are all Americans coming together for the same purpose — to be heard.”

“I have reassured him if things get out of hand a call will be made immediately and we will disperse,” Schlott-Green said. “Destruction does not accomplish anything. We need solidarity, smarts and sympathy.”

Chief Pelletier said he had a positive conversation with Schlott-Green about the planned event, which he will attend.

“I very much support her and all who attend as long as it doesn’t involve any property destruction,” Chief Pelletier said. “I will be the first one to support them in a peaceful demonstration.”

Similar events took place in Aroostook County on Monday evening in Caribou and Saturday, May 30, in Presque Isle.

“I would like to encourage everyone to exercise their right to peaceful protest, their right to vote in November and to stay educated,” Schlott-Green said. “Knowledge is power.”

The upper-level low pressure area that has been parked over southern New England will continue to stall there today into the overnight period then begin to open up and shift southeast into the Atlantic Thursday.
Campaign Corner END_OF_DOCUMENT_TOKEN_TO_BE_REPLACED

Dale Crafts filed his nomination papers for Feb. 21 with the Secretary of State to officially be placed on the primary ballot on June 9, 2020, for the U.S. House of Representatives 2nd District race.
Our Sponsors END_OF_DOCUMENT_TOKEN_TO_BE_REPLACED