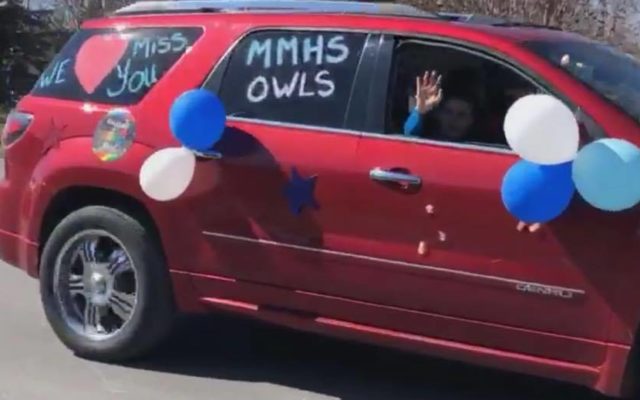 Teachers go on parade to keep in touch with students

Morgan Mitchell • May 21, 2020
At least two dozen teachers from the Madawaska elementary and middle/high schools found a way to let their students know they were missed.

MADAWASKA, Maine — At least two dozen teachers from the Madawaska elementary and middle/high schools found a way to let their students know they were missed.

The teachers formed a parade and drove around Madawaska May 14, passing by more than 275 students’ homes to express their love for their classes.

“Having to switch to remote learning so abruptly was hard for all,” Armstrong said. “There was definitely a sense of loss that we all had, and to some degree still have, when we were told not to come back to the buildings. So I wanted to plan something that would show the students that even though we are apart, we are still connected.”

She would have done it sooner, but the mid-May freezings proved uncooperative, Armstrong said.

“I want our students to know that we are still here and we miss them,” Armstrong said. “We have three weeks of school left and I hope that this will help to keep the kids and their families motivated to finish the year strong and stay engaged.”

While on their route, the teachers saw as many senior citizens watching as there were students, Armstrong said.

“They were so happy that it made yesterday even more special,” she said on May 15. “We made an entire community happy yesterday.”

“It really was so great to see all the teachers,” Migneault said. “We are very close with quite a few of them and have missed them dearly.”

The children made signs and decorated the driveway with chalk for the teachers. Ainsley Migneault, 12, said she loved making the signs and waving at her teachers. She added that it was “awesome” to see Bonny Tingley and Joan Albert — both teachers at the Madawaska Elementary School — in a muscle car.

“It was especially great to see Mrs. Christine Chasse because she has been out of school for so long before this,” Aisnley said. “I really missed her and I was happy to see she is doing well.”

“I was glad to see that everyone is still alive,” he said.

Only one member of Maine’s congressional delegation had come out in favor of impeaching President Donald Trump ahead of House Speaker Nancy Pelosi’s Tuesday announcement that the Democratic-led House of Representatives would begin an impeachment inquiry.
Apex Weather END_OF_DOCUMENT_TOKEN_TO_BE_REPLACED

High pressure will bring mostly clear to partly cloudy skies to northern Maine today and tonight as low-pressure slides east of the region in the southern part of the state.
Campaign Corner END_OF_DOCUMENT_TOKEN_TO_BE_REPLACED

Dale Crafts filed his nomination papers for Feb. 21 with the Secretary of State to officially be placed on the primary ballot on June 9, 2020, for the U.S. House of Representatives 2nd District race.
Our Sponsors END_OF_DOCUMENT_TOKEN_TO_BE_REPLACED