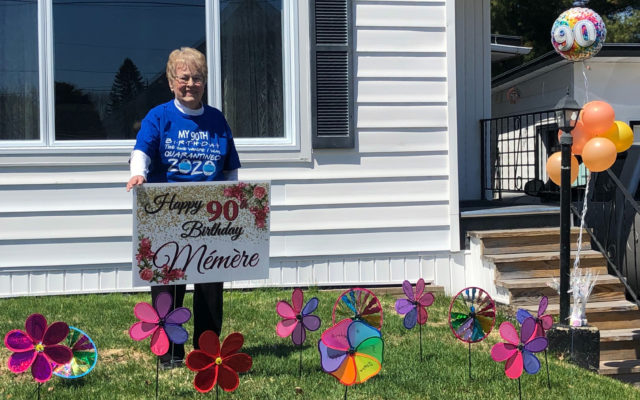 Morgan Mitchell • May 20, 2020
How do you celebrate a 90th birthday during a pandemic when the elderly are among the highest at risk? With a parade, of course.

MADAWASKA, Maine — How do you celebrate a 90th birthday during a pandemic when the elderly are among the highest at risk? With a parade, of course.

Germaine Caron of Madawaska got to experience her own private parade on Tuesday.

In honor of her 90th birthday, Caron’s friends met at the Marden’s parking lot at noon before driving down to her house. 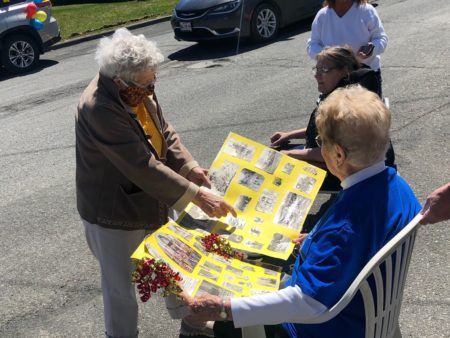 Caron was born and raised across the St. John River in St. Basile, New Brunswick. The oldest of 14 children, she was raised on a farm, married a farmer named Gilman Caron and then raised their six children on their farm in Grand Isle.

“My husband was a potato farmer,” Caron said. “I used to pick potatoes and make food for the workers.”

Caron’s daughter Diane Caron said their mother was a “devoted stay-at-home mother” who also “spoiled” the family with her cooking. She added that her mother has always been creative and uses that creativity to spread love to others.

“We all have mittens, hats, slippers, dishcloths and blankets she made,” Diane Caron said.

Caron is very active, according to her daughter, and enjoys playing cards with family and friends, attending aerobics classes, doing puzzles and playing bingo.

“We used to play every week at the senior center,” Caron said, and added that she missed her friends since she hadn’t been able to see them in a while due to COVID-19.

The parade, led by Madawaska police officer Ryan Albert, consisted of more than a dozen cars decked out with balloons, homemade posters and messages written on the cars to show love and support to the birthday girl.

“It’s the least we can do for people during these tough times,” Albert said after the parade.

Caron had no idea the parade was going to happen, and even a few cars in, she didn’t realize what was happening. In a Fiddlehead Focus Facebook Live video, Caron can be heard asking, “C’est pour moi, ca?” meaning, “Is this for me?” It wasn’t until her daughter confirmed the fact that she knew it was all for her.

The video sparked good feelings throughout the community. Madawaska resident Indya Ouellette, who works with the Office of Child and Family Services through the Department of Health and Human Services, shared the video as a social media post in which she quoted Caron’s question in French and said she was moved by the moment.

“It warms my heart to know that our older demographic is being celebrated in such a confusing and isolating time,” Ouellette said. “It’s nice to see our community get together and rally around the ones who have lived in and supported our little town for all these years as they are so important to us and our culture. It was too sweet.” 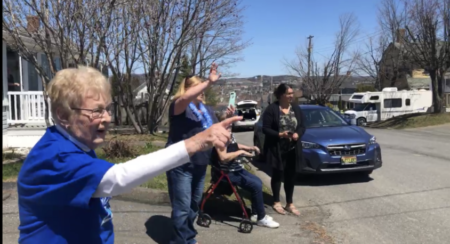 Some friends brought cards and gifts, and rather than Caron retrieve the items herself, her son Philip Caron used a pool cleaning net to act as a gift retrieving arm.

At the end of the parade, Caron said that “it was such a big surprise” that it made her feel “weak.”

“Our mom is well loved by many,” Diane said. “She is kind, generous and thoughtful. She may seem quiet, but everyone has been on the receiving end of her mischievous humor. We could not have been blessed with a more wonderful mother.”

Post-tropical cyclone Teddy is expected to cross Nova Scotia today and skirt the western shores of Newfoundland. Maine will experience little moisture from the storm.
Our Sponsors END_OF_DOCUMENT_TOKEN_TO_BE_REPLACED