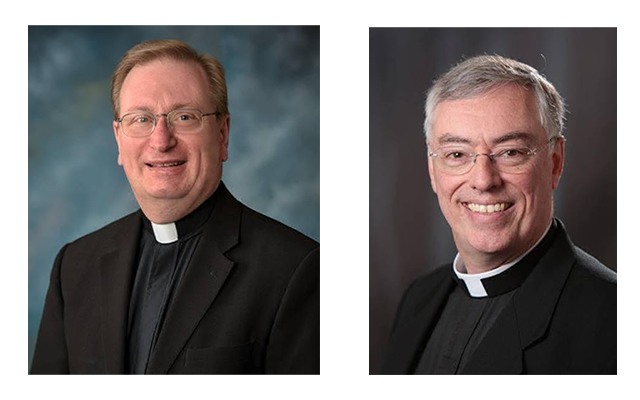 Along with his new duties, Dubois will remain a vicar general for the diocese.

A native of Fort Kent, he earned a bachelor’s degree in public accounting from Husson College in Bangor. He worked as a certified public accountant and auditor prior to entering the nation’s first and oldest seminary, St. Mary’s Seminary & University in Baltimore, where he earned a master of divinity, baccalaureate in sacred theology and a licentiate in sacred theology.

On June 29, 2000, he was appointed pastor of Holy Family Parish in Lewiston, where he would serve for five years. In 2005, he was named vicar for priests and director of ongoing formation for clergy. He also served as interim co-director of the Office of Vocations in 2007, before being appointed to his current positions as vicar general and moderator of the curia in 2008.

Dubois has served as a member of the Presbyteral Council, the College of Consultors, and the Priests’ Personnel Board.

Currently, he is a professor of theology and a member of the priestly formation faculty at Saint John’s Seminary in Brighton, Massachusetts, where he has served since July of 2016.

On May 20, 1989, he was ordained to the priesthood by Bishop Amédée W. Proulx at Holy Cross Church in Lewiston. In August of 1989, he was named parochial vicar of St. Louis Parish in Fort Kent, where he also served as chaplain at the University of Maine-Fort Kent. In 1990, in addition to his duties at St. Louis, then-Father Caron was named temporary administrator of St. Joseph Parish in Wallagrass and Holy Family Parish in Daigle, where he remained until August of 1992 when he was appointed parochial vicar of St. Joseph Parish in Biddeford.

While serving in Biddeford, he was also chaplain at the University of New England. From July of 1995 to July of 1997, he completed an advanced degree in sacred theology at The Catholic University of America, specializing in liturgical studies. Upon returning from Washington, D.C., he was appointed chancellor of the Diocese of Portland and served as director of the department of ministerial services.

Caron was named a Chaplain of His Holiness (Monsignor) by the Vatican in December 2000. During his time at the Chancery (1997-2008), he served as the interim co-director of vocations for a short period. In September of 2008, he was named administrator of the five Catholic parishes in Lewiston, and on January 1, 2009, he was appointed the founding pastor of Prince of Peace Parish in Lewiston (Basilica of Saints Peter and Paul Parish, Holy Cross Parish, and Holy Family Parish), where he served before his current assignment.

In addition to his parish duties, Caron has served as a member of the Presbyteral Council, the College of Consultors, and the Priests’ Personnel Board.

Submitted by the Communications Office of the Roman Catholic Diocese of Portland.

Maine is more than eight months into Medicaid expansion under the federal Affordable Care Act and trends around who is enrolling and where they live are starting to emerge, bucking some expectations and pointing out access challenges.
Apex Weather END_OF_DOCUMENT_TOKEN_TO_BE_REPLACED

Dale Crafts filed his nomination papers for Feb. 21 with the Secretary of State to officially be placed on the primary ballot on June 9, 2020, for the U.S. House of Representatives 2nd District race.
Our Sponsors END_OF_DOCUMENT_TOKEN_TO_BE_REPLACED