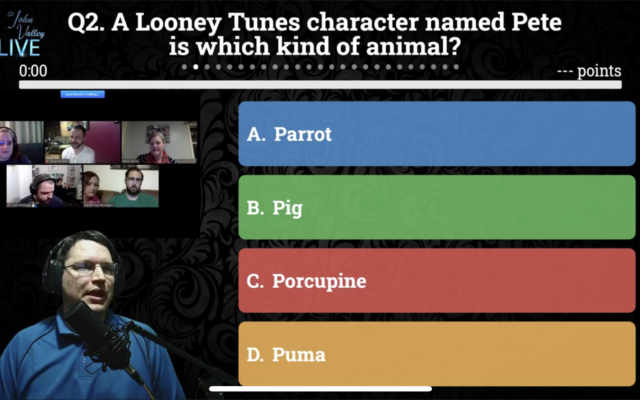 Morgan Mitchell • May 1, 2020
A new local streaming group has developed an event to help keep the Valley entertained as people wait out the COVID-19 quarantine and help area businesses with their charities.

MADAWASKA, Maine — A new local streaming group has developed an event to help keep the Valley entertained as people wait out the COVID-19 quarantine and help area businesses with their charities.

The trivia game helps raise money for a local charity or cause selected for that week.

The streaming service, Saint John Valley Live, which appears on Facebook, was organized and is sponsored by Jason Boucher, a local man who also voluntarily livestreams the town and school board meetings regularly.

Boucher, along with Justin Taggett and Charles Pelletier, were brainstorming ideas to entertain people at home while also helping small businesses when they came up with the trivia game idea.

“We talked about different podcasts we could do and other things, and then finally we were like ‘why not do a game show?’” Boucher said.

Contestants play to raise money, which is pooled as a prize for the winner, who in turn donates it to a local business that is doing something to make a difference in the community.

The founders decided the first trivia game would benefit a business that boosts children’s literacy — Bogan Books — and advertised that game as a fundraiser for that business’ cause.

Heidi Carter, owner and bookseller at Bogan Books who also played the trivia game and came in second place, said she did not know that the group decided to support her business’ project.

“When the Covid-19 pandemic hit and schools were placed on at-home learning, I was so impressed with the flexibility and responsiveness by the staff of our local schools that I wanted to do something that would help support what they were doing, but also promote literacy and the accessibility to it,” Carter said. “That’s when I launched the Bogan Books Book Drive to be able to raise money through the sales of specific gift certificates to buy books for the Valley Unified school libraries.”

When she saw the Facebook post from the Saint John Valley Live page that there would be a trivia game to raise money for her project, she got in touch to thank them — that’s when she decided to participate in the game itself.

“It was really fun and very beneficial to the cause of promoting literacy in the St. John Valley,” she said.

While the contestants played the game, viewers could follow along and enjoy the show while also being able to make donations for the cause.

The first trivia show aired April 17 and brought in $250, which was then given to Carter to purchase books for the schools.

She added that the trivia game was more than just a game.

“This is a very difficult time for many people, but the Saint John Valley Live trivia games are a creative way to provide entertainment while supporting good causes in the area,” Carter said. “I just feel that this is fantastic and we are so lucky to have such kind-hearted and creative people in our communities.”

The group plans to host more trivia games to raise money for other causes around the Valley.To find out more, visit its Facebook page.

Heavy snow is expected to overspread the Valley this afternoon and continue into the evening hours.
Crown Politics END_OF_DOCUMENT_TOKEN_TO_BE_REPLACED

Maine’s longest serving legislator, Martin was first elected to the Maine House of Representatives in 1964 when he was 23.
Our Sponsors END_OF_DOCUMENT_TOKEN_TO_BE_REPLACED