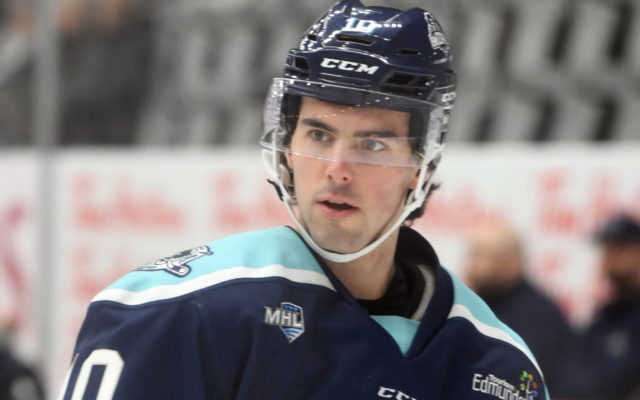 Contributed • April 30, 2020
The York University Lions in Toronto have announced that Brock McLeod of the Edmundston Blizzard has committed to their USPORTS program for 2020-21.

EDMUNDSTON, New Brunswick — The York University Lions in Toronto have announced that Brock McLeod of the Edmundston Blizzard has committed to their USPORTS program for 2020-21.

The Dartmouth, N.S., native spent parts of five seasons in the Maritime Junior Hockey League (MHL) with three different franchises. The 21-year-old was selected in the 2nd Round, 22nd overall, in the 2015 MHL Entry Draft by the Pictou County Weeks Crushers. McLeod played three games with the team in 2015-16, registering one goal. He was traded to the Valley Wildcats on January 10th, 2016. McLeod split his time in 2016-17 between the Wildcats and the Sherbrooke Phoenix of the QMJHL. In 16 games in Valley, McLeod had six goals and 12 assists and was named Gongshow Gear 3rd Star of the Month in December 2017.

McLeod spent nearly the entire season with the Wildcats in 2017-18, playing just three games with the QMJHL’s Charlottetown Islanders. In 49 games with Valley that season, he led the team with 59 points, including 17 goals and a team-leading 42 assists. McLeod would play just three games for the Wildcats in 2018-19, recording two goals and two assists, spending the rest of the season with the QMJHL’s Halifax Mooseheads.

Before the start of the 2019-20 season, McLeod was traded to the Edmundston Blizzard. He lead the team with 25 goals and 56 assists in 48 games, finishing tied for third in league scoring. He was named Gongshow Gear 2nd Star of the Month in January 2020. His impact on the Blizzard was massive, and he finished the season with a number of team records:

McLeod also collected at least a point in 26 of the team’s last 27 games.

Russ Herrington, Head Coach of the Lions, says, “We are very excited to add Brock to our team. We identified him fairly early this year as a player we felt would fit the style of puck possession play we want to play at York and think his vision and passing ability will be a great fit on our Olympic ice.  We are also equally impressed with Brock off the ice and believe that he brings the type of character, leadership and mindset that will make him successful during his years as a York Lion on the ice, in the classroom and in the community.”

The Maritime Junior Hockey League congratulated McLeod on his Junior A career and commitment to York University.

Maine is more than eight months into Medicaid expansion under the federal Affordable Care Act and trends around who is enrolling and where they live are starting to emerge, bucking some expectations and pointing out access challenges.
Apex Weather END_OF_DOCUMENT_TOKEN_TO_BE_REPLACED

Dale Crafts filed his nomination papers for Feb. 21 with the Secretary of State to officially be placed on the primary ballot on June 9, 2020, for the U.S. House of Representatives 2nd District race.
Our Sponsors END_OF_DOCUMENT_TOKEN_TO_BE_REPLACED