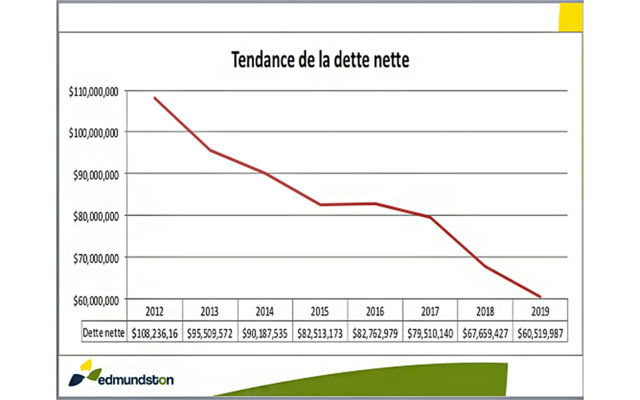 EDMUNDSTON, New Brunswick — The City of Edmundston’s net debt for 2019 has been reduced by $7.2 million compared to the previous year.

The debt in fact went from $108.2 million in 2012 and is now down to $60.5 million at December 31, 2019, a reduction of 44 percent, according to the 2019 financial statements that were presented during an April 21 public meeting of the municipal council. At this meeting, Council adopted the financial statements for the year 2019.

The New Brunswick Local Governance Act states that any surplus is to be credited to the current account two years after it is generated. As such, surpluses in all three funds will be included in the respective budgets in 2021.

“In addition to this, we were able to make investments from the operating budgets in the order of $2.3 million in 2019, which means that we had less need to borrow, thus minimizing the city’s debt level. We are very proud of these results,” said Simard.

According to the Canadian Public Sector Accounting Standards (PSAS), the consolidated surplus amounts to $4.8 million. It should be noted that grants received for various projects are included in revenues. Amortization on capital assets is part of expenses. The City registers $5.7 M in its reserve funds, an increase of $1.1M compared to the previous year. Of this amount, $3.3 million is allocated to the various capital asset funds.

The financial statements were presented by the firm Raymond Chabot Grant Thornton. That presentation can be viewed and downloaded by CLICKING HERE. Copies will also be available at City Hall when it reopens to the public.