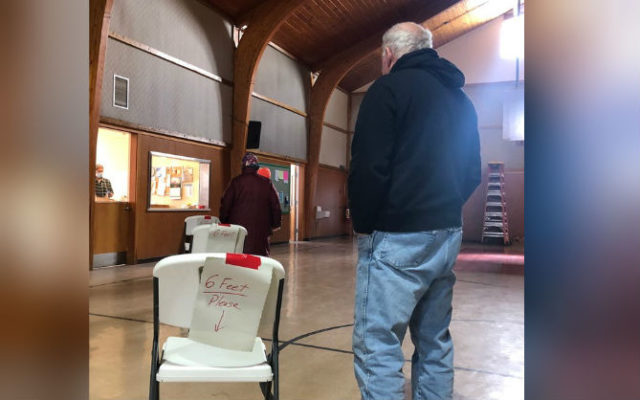 Morgan Mitchell • April 28, 2020
The Grand Isle Seniors Club extended its meal program to give local seniors a hot meal each week amid the COVID-19 shut-downs.

GRAND ISLE, Maine — The Grand Isle Seniors Club extended its meal program to give local seniors a hot meal each week amid the COVID-19 shutdowns.

What began as a church function in the mid-1980s has transformed into a lunch club that serves more than 80 seniors a week. Around 1990, the town started to help fund the luncheon that was monthly at the time.

The Senior Club puts on the lunch each week made possible with donations from the Aroostook Agency on Ageing,  Meals on Wheels and the town of Grand Isle.

The town of Grand Isle contributes $2,500 each year toward the program, while the other agencies help with funding food costs.

Mina Dionne of Grand Isle has attended senior lunch since it started in the 1980s. 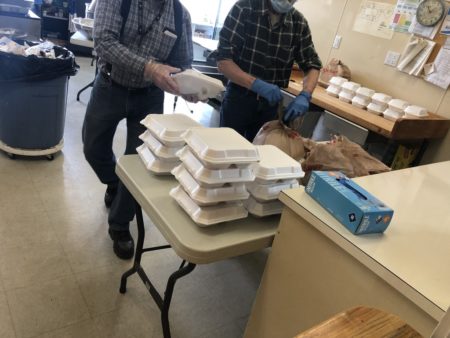 Volunteers help box up and package food for seniors to pick up their weekly lunch in Grand Isle. (Morgan Mitchell | SJVT)

Therese Sebastian has also been attending since the 1980s and said that she looks forward to the lunch every week.

“I’m so glad that they’re extending it a little bit to help us,” Sebastian said. “We say ‘we’re hungry!’ We feel like prisoners in our houses right now.”

Since COVID-19 shut down dining rooms in eating establishments, the Senior Club changed from in-house dining to takeouts and a few deliveries to those who cannot pick up their own meals.

While the program would have already ended for the season, the club decided to serve lunch beyond its normal end date to help seniors look forward to something each week during the pandemic.

On April 9, the seniors in Grand Isle got a special treat with their lunches.

Everyone who picked up their meal also got a $3 certificate to either Misty Meadows or the Grand Isle General Store. A total of 100 certificates were available.

Although the meal is still available, some seniors are missing their friends who they would normally meet up with at the luncheon each week.

Mina Dionne said that not being able to eat with her friends has left her feeling like something is “missing.”

“I love people and I love to talk,” she said.

Sebastian said that she has missed interacting with her friends each week, but remains hopeful.

“We’re all looking forward to next fall when we can get together and visit,” Sebastian said.