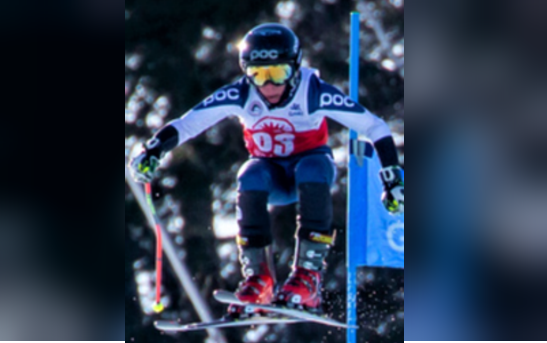 Jessica Potila, SJVT / FhF Staff Writer • April 27, 2020
A Fort Kent eighth-grader who qualified for the 2020 U14 U.S Ski and Snowboard Association Eastern Championship alpine races in Vermont learned on his way to the championships that the event was canceled due to coronavirus concerns.

FORT KENT, Maine — A Fort Kent eighth-grader who qualified for the 2020 U14 U.S Ski and Snowboard Association Eastern Championship alpine races in Vermont learned on his way to the March 13-15 championships that the event was canceled due to coronavirus concerns.

Kaden Theriault, 14, hopes that he will have the opportunity to compete again next year.

While at Carrabassett, Theriault competed in six USSA qualifying races, taking first place in his age division overall in Maine and qualifying for the Eastern Championships.

“On the way there it got canceled. We were like only an hour away,” Theriault said. “I was disappointed because of all the work I put into the season and I had a good year so I was hoping it was gonna be good.”

Theriault’s head coach at Carrabassett, Ron Bonnevie, said he has no doubt if Theriault had competed in the Eastern Championships, the youngster would have advanced to the next round of USSA competition — the international U14 Can-Am race, which hosts the 60 top American and 60 top Canadian skiers.

Eighth grader Kaden Theriault was all smiles after a successful run at Mount Abram Resort in Greenville. (Courtesy of Shawn Theriault)

“I would have been shocked if he didn’t qualify for that event,” Bonnevie said. “More importantly than missing the event though, was how steady Kaden was throughout the entire year.”

Bonnevie said that among Theriault’s skills is an ability to hold up under pressure during races, especially for someone so young.

“Kaden’s a bit of an iceman. When he gets in there he never seems to have any nerves. He has no problem dealing with the competition and always manages to go 100 percent,” the coach said.

“Kaden started skiing when he was just 2-years-old and ever since then he’s been on the fly,” Shawn Theriault said of his son.

Kaden said his favorite subjects in school are math, social studies and science, but his ultimate goal is to qualify for the U.S. Ski Team or to play soccer professionally. Kaden will be a freshman this coming school year, and plans to play on the Fort Kent Community High School soccer team in the fall and return to Carrabassett in the winter.

Kaden’s mother said it was not easy to be separated from her son last winter, but the family appreciates that Kaden had the opportunity to be trained at Carrabassett.

“While it was a difficult decision to let him go away for a little over three months, he seemed to be adjusting well to the new routine and it made it easier on us at home. His success on the slopes continued to remind us that he was in the right place,”  Landeen said. “We are very proud of his accomplishments and look forward to what the future entails for him.”

“I am very proud of Kaden doing what he loves and getting the success he works hard for,” Shawn Theriault added.

When he is not skiing, playing soccer or studying, Kaden Theriault enjoys dirt biking, golfing, fishing, and hunting.

Maine is more than eight months into Medicaid expansion under the federal Affordable Care Act and trends around who is enrolling and where they live are starting to emerge, bucking some expectations and pointing out access challenges.
Apex Weather END_OF_DOCUMENT_TOKEN_TO_BE_REPLACED

Dale Crafts filed his nomination papers for Feb. 21 with the Secretary of State to officially be placed on the primary ballot on June 9, 2020, for the U.S. House of Representatives 2nd District race.
Our Sponsors END_OF_DOCUMENT_TOKEN_TO_BE_REPLACED