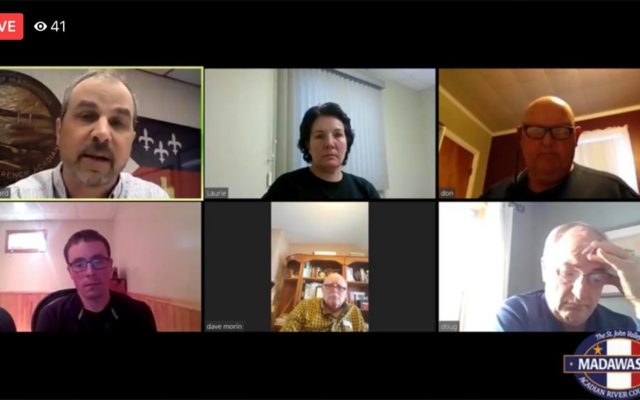 Morgan Mitchell • April 23, 2020
The Madawaska Board of Selectmen signed a loan resolution to keep the sewer project moving along to help transition from the project's interim financing.

MADAWASKA, Maine — The Board of Selectmen signed a loan resolution to keep the sewer project moving along to help transition from the project’s interim financing.

On Feb. 15, 2018, voters in Madawaska approved the sewer project during a special town meeting. The project was financed through grants and the remainder from the town.

The town took out a loan of $6,105,000 from USDA Rural Development Rural Utilities Service to meet its match obligation to the grant money. With the project fully funded through the grant and loan money, the town has moved to a repayment phase.

The obligation is to pay off the loan in equal payments over 28 years, with the repayment terms at a fixed tax-exempt interest rate of 1.375 percent per year.

The project is close to completion with only a few more sections of sewer to upgrade, as well as to complete the upgrades to the treatment facility.

At the end of discussion, Board Chairman Don Chasse clarified that the town is in debt a little more than $14 million, which covers projects and budgets from the sewer department, the town and the school.

The board members signed the resolution and moved on to the small business boost program.

The stimulus concept allowed for the St. John Valley Chamber of Commerce to sell $50 gift certificates at $25 each. The other $25 was paid for by the program.

The goal was to get the money into the hands of the small businesses each week.

When the program went into effect April 20, it had 28 businesses opt in, and gift certificates were sold out within two hours.

Cyr said he saw a good spread across all the different businesses that opted in, and a lot of people supported the sole proprietors like salon owners.

There were sponsors who also put in about $950 to the funds for the program to help keep it going.

“I don’t think I took one transaction where someone just bought certificates for just one spot,” Town Manager Gary Picard said, adding that he had taken many payments over the phone to help the program.

The board members discussed issues the chamber and town encountered during this process including phone line issues, managing emails while trying to maintain a first-come first-served basis, and of course the chamber office being closed to the public due to COVID-19.

“It was not flawless, I can tell you that,” Cyr said. “It wasn’t perfect. I knew it was going to be busy, but I did not expect the craziness that happened at 8 a.m.”

The program has more than 100 people on the waitlist for more than 500 certificates that couldn’t be processed because they ran out of funds.

“The objective was to get money into the business owners hands, and we completed that objective,” Cyr said.

He added that he really wanted the program to continue for the businesses, but also for the townspeople who wanted to get certificates.

Since every phone call they took and email they received, Cyr suggested that, if more funds were to be appropriated, then those who were on the waiting list get first priority to get the chance to purchase a certificate.

“No small business is getting rich off of this, but if we can help with that burden that people have lost due to pandemic, that would be great,” Cyr said.

The UDAG account has about $43,000 in it. Board of Selectmember Laurie Gagnon suggested the town throw an additional $20,000 into the boost program and open up registration to allow more businesses an opportunity to opt in. Cyr said he was going to try to be fair in admitting new businesses into the program.

The board moved forward to approve $20,000 to help pay 50 percent of the pending certificates for the waitlist, an additional 200 certificates and the balance of the funds to go toward the chamber for administration services.

Only one member of Maine’s congressional delegation had come out in favor of impeaching President Donald Trump ahead of House Speaker Nancy Pelosi’s Tuesday announcement that the Democratic-led House of Representatives would begin an impeachment inquiry.
Apex Weather END_OF_DOCUMENT_TOKEN_TO_BE_REPLACED

A strong upper-ridge anchored off the Southeastern US coast will bring warmer and more humid than normal conditions to the Valley through the late week period.
Campaign Corner END_OF_DOCUMENT_TOKEN_TO_BE_REPLACED

Dale Crafts filed his nomination papers for Feb. 21 with the Secretary of State to officially be placed on the primary ballot on June 9, 2020, for the U.S. House of Representatives 2nd District race.
Our Sponsors END_OF_DOCUMENT_TOKEN_TO_BE_REPLACED