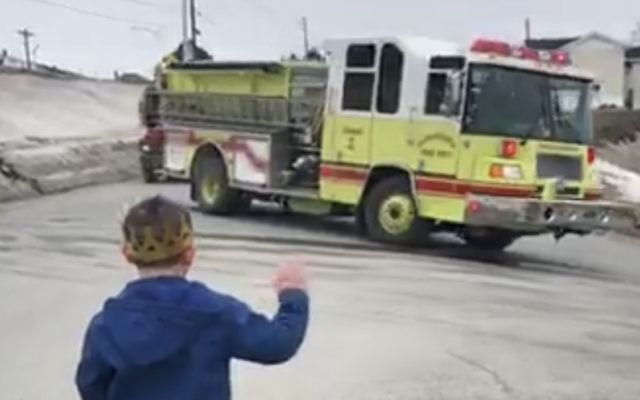 Community members and emergency response personnel drove by the boy’s house to give a birthday wave and blast of their horns and sirens.

While northern Maine continues to stay in during Gov. Janet Mills’ “Stay Healthy at Home” mandate, children continue to age and potentially miss important milestones in their childhoods. Birthdays are one of these milestones that children are missing out on, as they are unable to spend time with their friends.

To combat this sadness, Blake’s mother Shannon Berube and her friend thought up an idea to help brighten the spirits of the young boy.

However, COVID-19 had other plans. With social distancing in place, police, fire and the Madawaska Ambulance Service were notified of the birthday and agreed to put on a parade down the child’s street.

“It’s super emotional,” Madawaska Police Chief Ross DuBois said. “It’s sort of a silver lining of what we are dealing with in that people really do come together and support each other. It’s a privilege to be able to do this for our community.”

The parade was led by the Madawaska Police Department, then more than a dozen community residents’ vehicles decorated with balloons and signs that read “Happy Birthday Blake!” The ambulance and fire trucks and tankers followed up at the end of the parade.

As the cars with community residents went by, many had children in them from his school class. Some even handed a gift out the window to the birthday boy.

“That was cool,” Blake said at the end of the parade.

Shannon said she was very pleased with the parade and thankful to all who attended.

The upper-level low pressure area that has been parked over southern New England will continue to stall there today into the overnight period then begin to open up and shift southeast into the Atlantic Thursday.
Campaign Corner END_OF_DOCUMENT_TOKEN_TO_BE_REPLACED

Dale Crafts filed his nomination papers for Feb. 21 with the Secretary of State to officially be placed on the primary ballot on June 9, 2020, for the U.S. House of Representatives 2nd District race.
Our Sponsors END_OF_DOCUMENT_TOKEN_TO_BE_REPLACED