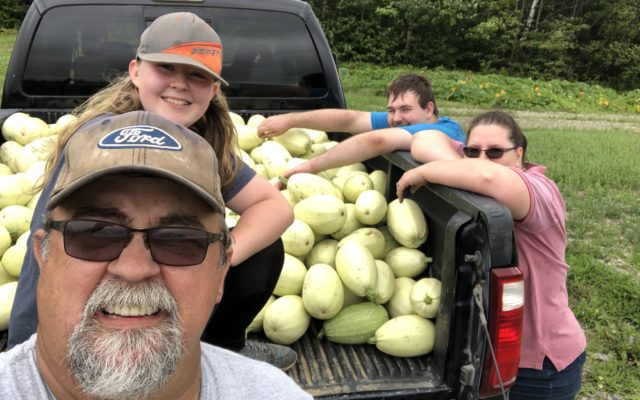 Jessica Potila, SJVT / FhF Staff Writer • April 8, 2020
Anderson Family Farm, which sprang from a small family garden, grew 4,000 heads of garlic last year. The family learned to turn their crop into garlic powder and garlic salt, which the farm now is licensed to sell to retailers.

FORT KENT, Maine — Longing to get back to the land, a Fort Kent couple with full-time day jobs that serve the community started a small family farm three years ago. The farm recently became licensed to sell its products commercially.

Anderson Family Farm, which sprang from a small family garden, grew 4,000 heads of garlic last year. The family learned to turn their crop into garlic powder and garlic salt, which the farm now is licensed to sell to retailers.

The family had not set out to develop their land into a commercial enterprise.

The Andersons, married for 20 years with two children, lived about 13 miles away from the property near downtown Fort Kent, and intended to use the land as a getaway from town life.

Early in the Andersons’ marriage, Kevin Anderson’s mother Jackie (Pelletier) Anderson had arranged with a local farmer to place a camper on a lot at Michigan Settlement in Fort Kent. The lot had once been the home of Jackie Anderson’s family farm where she had been born and raised.

“The house was long gone, but the memories were strong,” Kevin Anderson said of his mother’s old homestead.

Kevin and Janice Anderson’s kids, Caleb, now 18, and Haley, now 14, learned to ride their bicycles and enjoyed playing outside on the Michigan Settlement land, where the family also grew a small garden.

When Jackie Anderson died in 2009, circumstances changed and the family no longer spent their summers on that plot of land, but the Andersons never forgot the special memories they had made there.

“The kids always talked about it and always missed it. It was one of those deals where we’d been talking about it for a couple of years — how we’d like to buy a little piece of land and it would be nice to put a camper up again,” Kevin Anderson said. 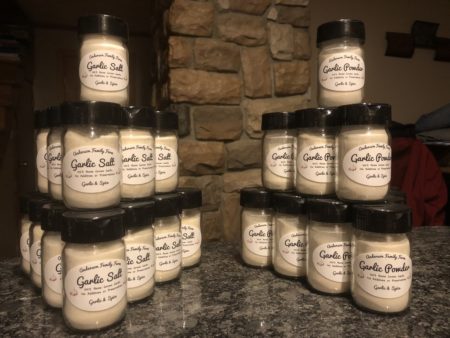 In 2017, the Andersons found out from a friend about some land for sale — 30 acres of fields and 30 acres of woods — in Daigle. It was more land than what they had been looking for, but the price was right.

The family set up a 38-foot camper on the plot and planted a small garden.

The garden soon grew bigger and before they knew it, the Anderson family had more harvest than they could consume, and began selling vegetables in a stand at their 53 Highland Ave. home in Fort Kent. Based on the honor system, the stand proved successful.

The leap from farm stand to garlic products was a matter of practicality.

“We had a lot of garlic hanging to dry and Jan was worried we wouldn’t sell it all. She said, ‘what if we made garlic salt and garlic powders with the excess,’” Kevin Anderson said. “ Neither of us had any clue what that entailed but we decided to give it a try.

“As we were researching, she said we should do herbs and spices too and at that point, the dreams started to become reality. We went to the town and the state to get licensure and will start providing herbs and spices this summer along with the veggies.”

The Andersons are still dedicated to their day jobs and live in town, but spend much of their free time cultivating their farm, which is in every way a family endeavor.

“It takes us both, and our kids. It’s a lot of work, but fun work and good quality family time too,” Kevin Anderson said.

Kevin Anderson also has a 33-year-old son, Daniel Anderson, who with his wife Chantelle set up a camper on the farm where the couple and their two children spend time during the summer months. The grandchildren also enjoy spending time on the farm, helping to pick vegetables and burning off energy on the land.

Kevin Anderson said that when he retires from teaching, he hopes to turn the farm into a retirement project.

“It’s really a full-time job. In the summer I’m there from morning to night, but I love it. I say it’s a full time job but it doesn’t feel like a job. I get tired because I’ve worked, but it’s a good tired,” Kevin Anderson said. “Diesel and dirt therapy is what I call it. To work the ground is just rejuvenating so even though it’s hard work, it’s rejuvenating and rewarding.”

The couple has invested their savings into the farm, having purchased a small 25-horsepower tractor, a dump truck, cultivator and tiller. They also purchased a single-row potato digger from the early 20th century that was once hauled by a horse but has been converted to be hauled by a tractor.

“We have a lot of older equipment but the stuff still works and is doing a great job,” Kevin Anderson said.

Kevin Anderson said some days he looks at the family checking account and knows they would have more money in the bank had they not invested in the farm, but they have no regrets.

“We’re rich in other ways; we’re rich in what we have and the life that we’re living,” he said. “We just enjoy what we’re doing.”

Only one member of Maine’s congressional delegation had come out in favor of impeaching President Donald Trump ahead of House Speaker Nancy Pelosi’s Tuesday announcement that the Democratic-led House of Representatives would begin an impeachment inquiry.
Apex Weather END_OF_DOCUMENT_TOKEN_TO_BE_REPLACED

Dale Crafts filed his nomination papers for Feb. 21 with the Secretary of State to officially be placed on the primary ballot on June 9, 2020, for the U.S. House of Representatives 2nd District race.
Our Sponsors END_OF_DOCUMENT_TOKEN_TO_BE_REPLACED