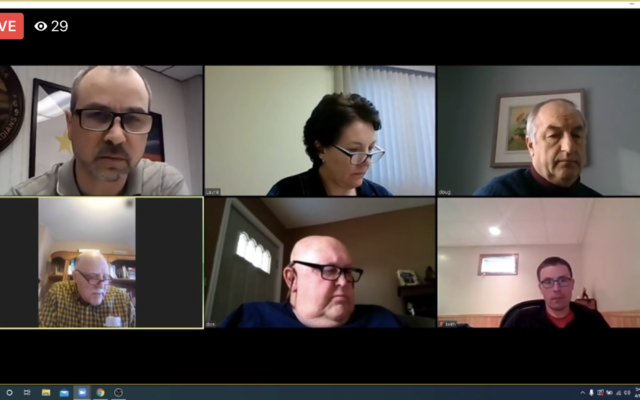 Morgan Mitchell • April 7, 2020
The Madawaska Board of Selectmen approved a $11,500 stimulus concept that would allow payouts to qualifying businesses in the Madawaska and St. David area.

MADAWASKA, Maine — The Madawaska Board of Selectmen approved a $11,500 stimulus concept that would allow payouts to qualifying businesses in the Madawaska and St. David area at its April 6 teleconference meeting.

The board also voted to move forward with the amphitheater as planned and to put a road paving project out to bid.

The stimulus concept would allow for the St. John Valley Chamber of Commerce to sell $50 gift certificates at $25 each. The other $25 would be paid by the program. Any businesses in Madawaska or St. David that have been somehow affected by COVID-19 qualify for the program. Each week, qualifying businesses that opt in to the program are expected to get a payout from the chamber depending on how many of their certificates are sold.

“The idea is to put immediate money into the hands of businesses on a weekly basis to assist them through the economic hardship,” Economic Development Director Keith Cyr said.

The town and chamber worked together to compile a list of businesses. Picard said the program has so far generated some interest.

Businesses can choose whether to participate. Customers can purchase a gift certificate and designate which business they intend to shop with it through the St. John Valley Chamber of Commerce.

“Depending on how this goes, it might be something worth renewing,” Picard said.

The board decided to move forward with the motion to use $11,500 UDAG funds for the program.

The chamber and economic development director said Tuesday they were finalizing more details about the program that would be available to the public soon.

The Board of Selectmen also revisited the controversial planned amphitheater pocket park and whether to leave the plans as they are or adjust them to go with what the public comment recommended.

Eight people wrote in comments backing the idea of 11-year-old Drew Levesque who suggested a miniature golf course be built, rather than an amphitheater.

“Have a mini putt with fun facts about Madawaska on each course,” the letter suggestion read from Levesque.

Levesque had support from not only his family, but also from a few other community members.

The idea was not well accepted by town officials.

“In terms of downtown revitalization, I think keeping it as currently planned and working with local organizations and groups, I think we can make that program an area where the community can come together,” Cyr said.

“Not just to make it prettier, but to make it more vibrant,” said Madawaska Town Manager Gary Picard.

“I would rather see something built in the bicentennial park that would accommodate things that can be done in this park and make that the center of our performing arts,” Selectman Dave Morin said.

Morin agreed that mini putt would be fun but that the location would not be the best place with parking and traffic issues.

“I have heard nothing positive about having an amphitheater in that area,” Morin said.

After more discussion, the board decided to reaffirm its previous decision to develop the amphitheater, with Morin voting against the motion.

At the conclusion of the meeting, the Board of Selectmen discussed whether to hold off on the road repair and paving project approved at the 2019 annual town meeting that would repair 30 roads around town since the town would have to borrow money for it. Chairman of the Board Don Chasse said he felt it would not be a good idea to borrow money at this time.

He agreed with Picard that the town should still put the project out to bid to see what comes back. The article townspeople approved in the 2019 town warrant for this project stipulated that the project should not exceed $3 million.

The board decided to put the project out to bid, then revisit the issue once bids have been submitted.

The board meeting was streamed to the public via Jason Boucher on Facebook live.

The upper-level low pressure area that has been parked over southern New England will continue to stall there today into the overnight period then begin to open up and shift southeast into the Atlantic Thursday.
Campaign Corner END_OF_DOCUMENT_TOKEN_TO_BE_REPLACED

Dale Crafts filed his nomination papers for Feb. 21 with the Secretary of State to officially be placed on the primary ballot on June 9, 2020, for the U.S. House of Representatives 2nd District race.
Our Sponsors END_OF_DOCUMENT_TOKEN_TO_BE_REPLACED