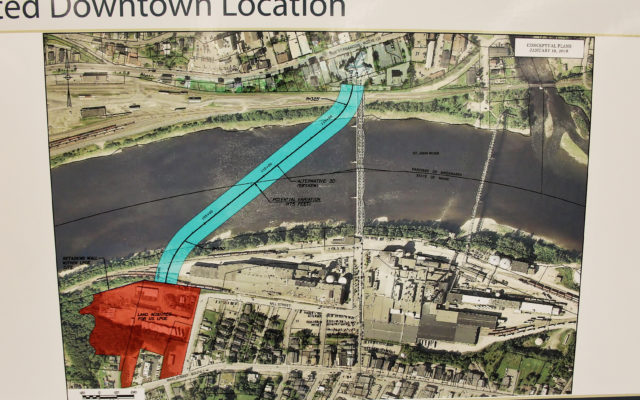 Morgan Mitchell • February 27, 2020
The General Services Administration released its Record of Decision selecting Alternative C as its final choice for the Madawaska Land Point of Entry on Tuesday.

MADAWASKA, Maine — The General Services Administration released its Record of Decision selecting Alternative C as its final choice for the Madawaska Land Point of Entry on Tuesday.

“The Record of Decision authorizes the federal government to proceed with design, land acquisition and construction based on the availability of funds,” the administration said.

Officials with the Maine and New Brunswick transportation agencies, engineering consultants and other representatives from U.S. and Canadian agencies unveiled plans in January 2019 to build the new bridge extending from the existing span’s location in Edmundston and ending about 1,300 feet up the St. John River from the existing port of entry in Madawaska.

The current bridge was built in 1921 and is about 20 years beyond its anticipated lifespan. After engineers expressed concerns about the bridge’s structural integrity in October 2017, officials restricted the bridge’s weight limit to five tons, severely limiting heavy commercial traffic.

That action also prompted officials to move up the timeline for a resolution.

In December 2018, Bill Plumpton, the senior vice president of Gannette Fleming, the engineering firm hired by the Maine Department of Transportation, General Services Administration and the federal highway administration to work on this project, outlined the three alternatives the administration considered for the land point of entry.

Plumpton said alternatives B and C would require the administration to buy the McDonald’s restaurant property for either of those models to work.

Some of the reasons the administration decided on Alternative C included traffic flow, efficiency, how it meets DOT’s guidelines, safety for outbound and inbound traffic, lack of steep roads and elevation, increases line of sight for officers which in turn increases safety and security and provides snow storage and future expansion, the General Services Administration said.

The next steps continue to follow the “aggressive timeline” laid out previously to complete the bridge. General Services Administration will finalize the design, begin land acquisition including the McDonald’s property and continue the planning process for the construction of the new land port of entry.

“GSA will continue to work collaboratively with Maine DOT and the New Brunswick Department of Transportation and Infrastructure to coordinate construction of the land port of entry with the new international bridge project,” said Paul Hughes, regional public affairs officer for the association. “GSA, in partnership with [U.S. Customs and Border Protection], remains committed to ensuring that the land point of entry is operational when the bridge is completed.”

Maine is more than eight months into Medicaid expansion under the federal Affordable Care Act and trends around who is enrolling and where they live are starting to emerge, bucking some expectations and pointing out access challenges.
Apex Weather END_OF_DOCUMENT_TOKEN_TO_BE_REPLACED

The North Atlantic high will break down at the end of the week allowing high pressure from the west to build in with drier conditions.
Campaign Corner END_OF_DOCUMENT_TOKEN_TO_BE_REPLACED

Dale Crafts filed his nomination papers for Feb. 21 with the Secretary of State to officially be placed on the primary ballot on June 9, 2020, for the U.S. House of Representatives 2nd District race.
Our Sponsors END_OF_DOCUMENT_TOKEN_TO_BE_REPLACED