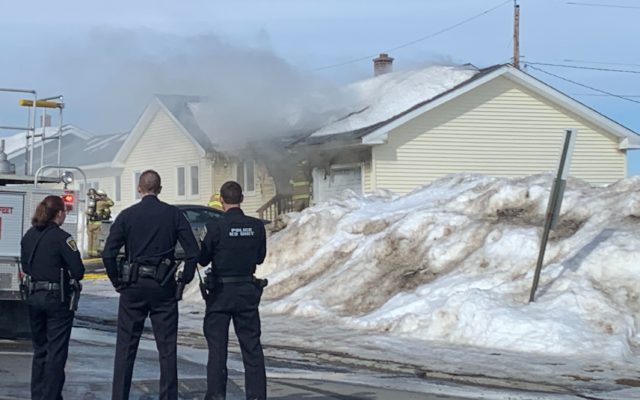 David Marino Jr. • February 26, 2020
A stove fire caused extensive damage to a duplex on Micmac Drive in Presque Isle on Tuesday, but the Presque Isle Fire Department was able to save a dog who was inside.

PRESQUE ISLE, Maine — A stove fire caused extensive damage to a duplex on Micmac Drive in Presque Isle on Tuesday, but the Presque Isle Fire Department was able to save a dog who was inside.

Presque Isle Fire Chief Darrell White said the department received a call at around 12:14 p.m. of a fire at 34 Micmac Drive. He said the inhabitants of the home were able to evacuate quickly, but that a dog who was in the home at the time appeared to suffer injuries from smoke inhalation.

White said the dog was lethargic and “barely breathing” when firefighters brought it out of the home. Using animal resuscitation equipment given to the department by an anonymous donor about seven months ago, firefighters were able to revive the dog.

“We were able to put the mask on and provide it with oxygen,” White said. “It was at about 20 minutes that it started to come around, to the point where it was able to walk and drink some water.”

White said the dog was delivered to the veterinarian, who sent it home later that day with medicine. He said it was the first time his department had made use of the new equipment.

“We appreciate it being donated,” White said. “It was put to good use.”

White said 18 firefighters were sent to the scene to extinguish the fire. Smoke billowed out of the top of the house for several minutes before stopping at around 12:45 p.m., as firefighters were able to curtail it from spreading to the other side of the duplex.

After the smoke stopped, firefighters removed the charred remains of several objects out of the front door of the home. White said firefighters left at around 1:30 p.m.

Initially, several Presque Isle Police officers were at the scene, though they did not close off the nearby intersection of Micmac Drive and Midway. As the firefighters extinguished the flames, several officers left.

A car from the Maine Fire Marshal’s Office was also at the scene.

Post-tropical cyclone Teddy is expected to cross Nova Scotia today and skirt the western shores of Newfoundland. Maine will experience little moisture from the storm.
Our Sponsors END_OF_DOCUMENT_TOKEN_TO_BE_REPLACED