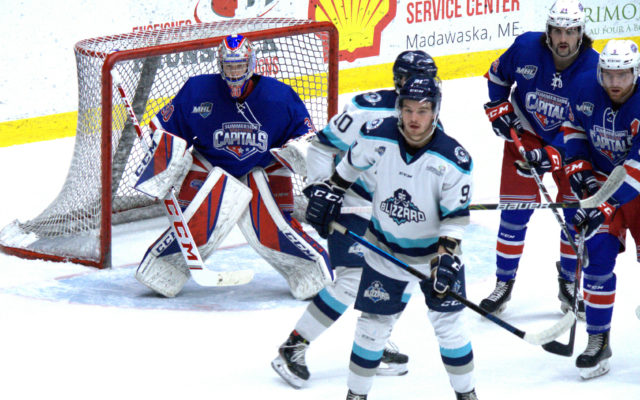 Contributed • February 19, 2020
While the Summerside Western Capitals climbed to second place in the country, the Edmundston Blizzard retained its honorable mention in the latest Canadian rankings.

The Blizzard drew attention for a sixth straight week in the ranking, which includes 131 teams in 10 leagues.

Edmundston had a successful week, with two victories. A 4-2 win on Feb. 13 in Fredericton was followed up with a 6-3 win at home against Grand Falls on Feb. 16. The Blizzard sit in second place in the Eastlink North with a record of 30-9-1-6.

Summerside leads the Maritime Junior Hockey League with a record of 38-6-0-2 and can clinch both the Eastlink North and the overall regular season title with a win this week. The Western Capitals are riding a five-game winning streak after picking up three victories last week: a 3-0 home win over the Campbellton Tigers Feb. 13, a 5-4 win in Campbellton Feb. 14 and a 4-2 win over the Truro Bearcats on Feb. 16.

The Sherwood Park Crusaders (Alberta Junior Hockey League, 45-8-0) kept its first place in the country, followed by Summerside in second and the Coquitlam Express third.

The Blizzard has only six games to play in the regular season, three on the road and three at home. The two games this week will not be easy. Edmundston will face Summerside in Prince Edward Island at 7 p.m. on Feb. 20 and Fredericton in New Brunswick’s capital at 7 p.m. on Feb. 21.

Fredericton and Campbellton are tied in third place with 51 points but Campbellton has two games in hand.

Summerside has moved up one step and ranks third nationally. Two teams from the Alberta Junior Hockey League, the Sherwood Park Crusaders (44-7-0) and the Okotoks Oilers (42-6-4) rank respectively first and second.

Maine is more than eight months into Medicaid expansion under the federal Affordable Care Act and trends around who is enrolling and where they live are starting to emerge, bucking some expectations and pointing out access challenges.
Apex Weather END_OF_DOCUMENT_TOKEN_TO_BE_REPLACED

The North Atlantic high will break down at the end of the week allowing high pressure from the west to build in with drier conditions.
Campaign Corner END_OF_DOCUMENT_TOKEN_TO_BE_REPLACED

Dale Crafts filed his nomination papers for Feb. 21 with the Secretary of State to officially be placed on the primary ballot on June 9, 2020, for the U.S. House of Representatives 2nd District race.
Our Sponsors END_OF_DOCUMENT_TOKEN_TO_BE_REPLACED