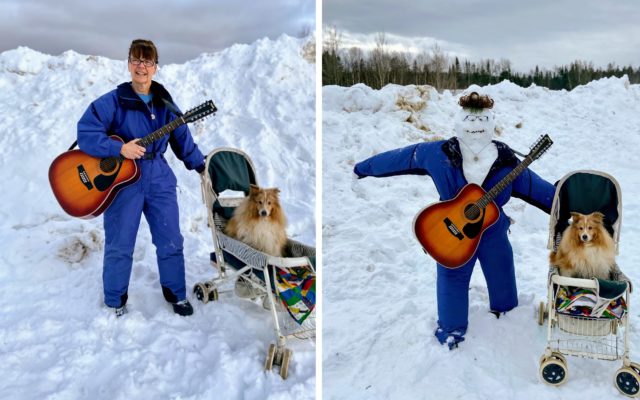 Morgan Mitchell • February 18, 2020
The Dr. Levesque Elementary School won the third place prize of $1,500 for participating in an event that encouraged healthy, fun winter habits through games and projects during January.

FRENCHVILLE, Maine — The Dr. Levesque Elementary School won the third place prize of $1,500 for participating in an event that encouraged healthy, fun winter habits through games and projects during January.

Dr. Levesque Elementary School in Frenchville kicked off the Winterkids program with an opening ceremony at the school on Thursday, Jan. 9, when students were able to do a mock torch run and hear from guest speaker Amy Dionne, a local musher.

At the beginning of the event, each child got a mask and a WinterKids bracelet before a student in a Blue Man suit entered into the cafeteria to the Michael Jackson song “Thriller.” After the Blue Man entered, the ceremony was officially kicked off with the lighting of the torch, snowflake confetti, blue ribbon wands and dancing. 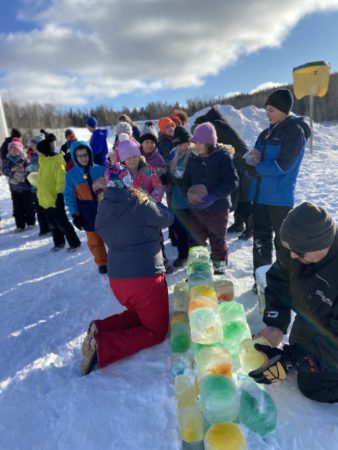 Students from Dr. Levesque Elementary School used frozen milk jugs and cartons to build a multicolored wall during the closing ceremonies of the WinterKids event. (Contributed)

Week one of the WinterKids competition focused on outdoor physical activity and science. Nutrition and math was the focus of week two. Week three focused on family engagement and art and week four included a winter carnival and technology/engineering learning projects.

For the conclusion of the month-long event, the students built a wall out of frozen milk jugs and cartons and had snowflakes printed out from a 3D printer, according to Stephanie Nadeau, school nurse and organizer of the WinterKids event for Dr. Levesque Elementary School.

“On the last day of the winter games, we held our winter carnival where we had stations for all students to visit and participate in technology and engineering activities,” Nadeau said. “We had County Environmental, Michelle Hersey, Sarah Ashley, Kyle Labbe, the National Weather Service came from Caribou and our applied technology students from St. John Valley Technology Center.”

The finale came down to six schools being tied for first, and the tiebreaker was to make a snowman that looked like the school’s principal. After suiting up, Dr. Levesque Elementary School brought home third place.

Nadeau said that the money was going back to the kids.

“We are revamping our indoor recess car with giant sized outdoor games like dice, cornhole, ring toss, Jenga, Connect 4 and dominoes,” Nadeau said. “We are also going to be purchasing new sleds for the kiddos.”

“We had a wonderful month of Winter Kids winter games activities,” said Fort Kent Elementary School Principal Robby Nadeau. “It was great to see all the kids, staff and families involved in being active during the winter. We have 7-month-long winters, so the more we can enjoy that time, the happier we will be. Congrats to the third place finisher, Dr. Levesque Elementary School.”

A cold front moves through today with scattered showers that will taper off this evening as high pressure builds into the region with partly cloudy skies.
Crown Politics END_OF_DOCUMENT_TOKEN_TO_BE_REPLACED

All five candidates running for two seats on the Fort Kent Town Council gathered at a live question and answer forum.
Our Sponsors END_OF_DOCUMENT_TOKEN_TO_BE_REPLACED