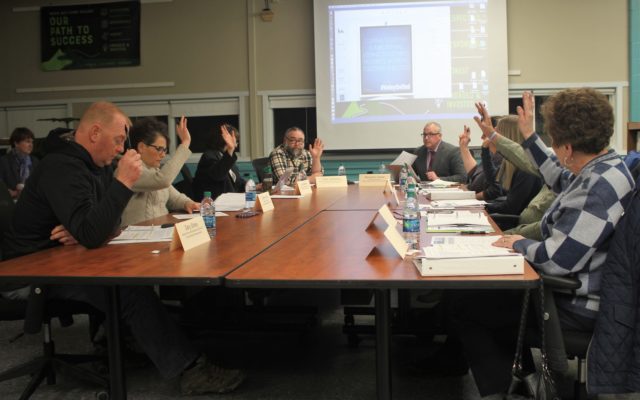 What we know about the Valley Unified Regional School project

Jessica Potila and Morgan Mitchell, SJVT • February 11, 2020
Here are a few things that might be helpful as you participate in the straw poll.

The residents in the towns from school administrative units SAD 27, SAD 33 and the Madawaska School Department in the St. John Valley will participate in nonbinding straw polls on Feb. 11 and 12 to gauge public desire to continue with the process to build a new regional middle/high school in Frenchville. The Maine Department of Education will fund $100 million toward the school. The process of forming a regional board and selecting a site for the Valley Unified Regional Service Center has been going on for more than a year.  Here are a few things that might be helpful as you participate in the straw poll.

What will the Department of Education’s $100 million actually buy?

If the project moves forward to the next steps, a process will be implemented to identify the necessary components for the site and building, which will be used to determine what elements of construction will be included in the $100 million grant from the state.

What parts of the new school will the towns have to fund?

Although the state money will cover what the DOE deems necessary for educational programs, it is possible that the towns could choose to select options or upgrades that would have to be funded locally.

What aspects of a new school are considered “extras”?

It is unclear at this time what elements of the school the DOE considers educationally necessary or what they consider to be “extras.”

What will happen to the old junior/high schools in the individual towns?

While that is unknown at this time. The buildings are not owned by Valley Unified, so the ultimate decisions about them would be left up to the towns.  The towns will also be responsible for funding any maintenance or upkeep to the buildings.

Will there be extra expenses related to a septic system or sewer upgrade at Frenchville?

Who will design the school?

Valley Unified made it clear when hiring engineering firm WBRC to help narrow down possible sites for the regional school that a new request for bids would be issued for the concept design phase. WBRC may participate in the new bid process to design the school.

How much say will townspeople have about the school’s design?

A committee of educators and community stakeholders will be formed to develop an “educational vision” in the next phase after the straw polls in February. While the design stages will not occur until after the first nonbinding straw poll is held, Valley Unified plans to have several meetings between the results of the first straw poll and the holding of the next straw poll, which will gauge residents’ support of the vision and concept design.

Who will govern the school?

The Valley Unified Board of Directors is the governing board for the proposed school. That board exists and is composed of three representatives from each school administrative unit. For every voting matter, the board must vote with a two-thirds majority with at least one member from each SAU voting as the majority, or else the votes must be 7/9 as long as at least one member from each SAU is represented in the vote for it to pass.

How will the school bus system work?

This has not been determined.

Is there a limit for how far a student can be bused, and how much time will this add to the bus ride for the students at the farthest points away from the school?

This level of detail is not available at this phase.

How will the court complaints brought against Valley Unified for its site selection process affect the project?

This is unknown at this time.

Once there is a new regional school, how will it affect taxes going forward to maintain the building and system?

That will not be known until the next phase of the project. “A comparative cost analysis of keeping and repairing our current high schools instead of constructing the proposed regional school will be developed and shared with community stakeholders in the next phase of the Valley Unified school project,” said Peter Caron, coordinator for community outreach with Valley Unified.

What happens to all of the teachers from the individual schools?

After a recent enrollment projection study, Valley Unified has determined that all current teaching staff will be needed to address and achieve the proposed regional school’s goals.

What happens to all of the athletic teams?

Discussions regarding athletics will not occur until a site is finalized for the proposed regional school.

How was the Frenchville site chosen over those in Fort Kent or Madawaska?

A committee composed of 17 members from across the Valley recommended engineering firm WBRC to assist in the narrowing of potential sites while using a matrix to score those sites. After revamping the matrix and taking a closer look at both sites, including things like police, fire and ambulance proximity, lot size, viability and sustainability, the committee selected Frenchville to recommend to the Valley Unified Board, which also voted to approve that site.

Where is the specific location in Frenchville for the proposed new school?

The site is located next to the current St. John Valley Technology Center, which is 9.8 miles from Madawaska town center and 9.9 miles from the Fort Kent town center, according to Google Maps.

It is unknown at this time. If a member town chooses to withdraw from one of the administrative units, the governance documents, state statutes and the Maine Department of Education would all be factors in determining whether the project would continue.

What will be the straw poll process?

The upcoming, non-binding straw polls involve the location of the school, and do not commit any town or SAU in the Valley to build the school, rather they are designed to show the State Board of Education where the communities stand on the project. If the results of the straw polls are positive, the project will move to the next phase.

What question can I expect on the ballot?

“Are you in favor of the Frenchville 3A/3B site as the location for the proposed Valley Unified Regional School?”

What would a yes or no vote mean?

A “yes” vote would allow the process to move forward with the next steps in the design and concept phase. A “no” vote could potentially end the project, though the final decision is in the hands of the Department of Education.

What will be the actual cost distribution by percentage if the new school is built?

As the Maine Turnpike expects 1 million travelers alone over the Labor Day weekend, policymakers are gearing up for a sprint to solve one of the state’s most intractable problems: a long-standing — and growing — transportation funding gap.
Apex Weather END_OF_DOCUMENT_TOKEN_TO_BE_REPLACED

Low pressure will move towards the Northeast from a low pressure over the Ohio Valley/Pennsylvania region this evening with the primary low tracking into Québec tomorrow.
Campaign Corner END_OF_DOCUMENT_TOKEN_TO_BE_REPLACED

U.S. Senator Angus King (I-Maine) today visited with students at the University of Maine at Fort Kent (UMFK) to discuss his work in Maine and Washington and answer questions from students.
Our Sponsors END_OF_DOCUMENT_TOKEN_TO_BE_REPLACED