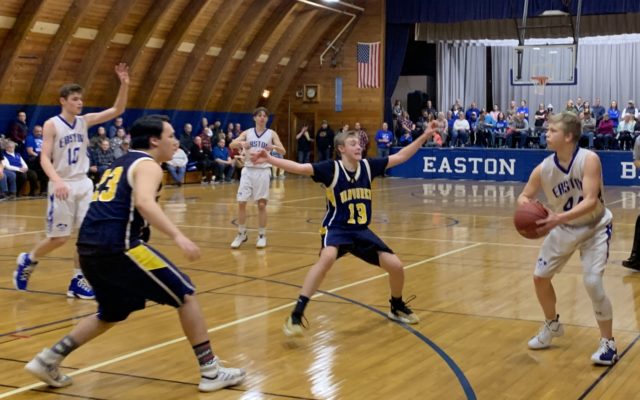 Jessica Potila and Morgan Mitchell, SJVT • February 10, 2020
Five boys and girls basketball squads from the St. John Valley are heading to the postseason this year as the Fort Kent boys and girls, Madawaska boys and Van Buren boys and Wisdom girls all made the playoffs.

ST. JOHN VALLEY, Maine — Five boys and girls basketball squads from the St. John Valley are heading to the postseason this year as the Fort Kent boys and girls, Madawaska boys and Van Buren boys and Wisdom girls all made the playoffs.

It will be a “Battle of the Valley” for boys basketball Wednesday as No. 3 Fort Kent (15-3) hosts No. 14 Madawaska (10-8) in a preliminary Class C North playoff at 3:30 p.m. The Warriors are not expecting an easy win over the Owls, according to Fort Kent Head Coach Chad Cyr.

“Madawaska has made vast improvements over the year and seem to be peaking at the perfect time,” Cyr said. “Although over our last two meetings we have come out victorious, we need to keep our focus and do all the little things correctly to win this matchup. We as a team respect them greatly and I expect this game to be one for the ages.”

Cyr said the Warriors need to take care of the basketball, continue to play together and get out in transition at every opportunity.

“Regardless of the outcome, I hope the winning team can make a deep tournament run and represent the Valley proudly,” he added.

Doors will open at 2:55 p.m. and booster club court side seats are available for advance purchase on a first-come, first-serve basis by emailing SAD 27 athletic director Eric Werntgen at ericwerntgen@sad27.org. WFKTV Channel 4 will also livestream the game on its Facebook page.

The winner of this contest advances to the quarterfinals at 9:30 a.m. Wednesday, Feb. 19, in Bangor against the prelim winner of No. 6 Mattanawcook Academy-No. 11 Lee Academy.

The No. 12 Fort Kent girls (5-13) must travel downstate for a prelim game against defending state runner-up No. 5 Penobscot Valley (12-6) at 6 p.m. Tuesday, Feb. 11 in Howland. This will be the sixth prelim appearance for the Warrior girls in six years under head coach Kelly O’Leary. In 2018, the girls defeated Fort Fairfield at home to make it to the quarterfinals in Bangor.

O’Leary is optimistic his team will make another trip to the Cross Center this year, but respects the challenge Penobscot Valley poses.

“They are well coached and have a core group returning that are tough and veteran,” O’Leary said. “We have played PVHS in the UMFK summer tournament two years in a row and are familiar with what they do and how they play. It will be a game our team is ready for and our confidence going in is pretty high.”

If the Warriors are successful, the team advances to the quarterfinal round 7 p.m. Tuesday, Feb. 18, against the prelim winner of No. 4 Calais-No. 13 Woodland.

In Class D North action the Wisdom girls finished 11-7 on the season and earned the fifth seed in the region. The Pioneers are headed directly to Bangor for the quarterfinals where the team will face off against No. 4 Shead of Eastport (12-6), 2 p.m. Monday, Feb. 17 at the Cross Insurance Center.

First-year head coach Scott Pelletier said his team of just seven players is young, but enthusiastic and honored to play in Bangor.

“Shead is a very strong opponent,” Pelletier said. “They have speed and are physical. From what I have gathered, they are a very good rebounding team. I look forward to a week of preparing my team to face this formidable opponent.”

The coach added he was proud of his young squad for accomplishing such an impressive feat.

“They are truly a family and rely on each other,” he said. “We play together and we play for each other.”

Maine is more than eight months into Medicaid expansion under the federal Affordable Care Act and trends around who is enrolling and where they live are starting to emerge, bucking some expectations and pointing out access challenges.
Apex Weather END_OF_DOCUMENT_TOKEN_TO_BE_REPLACED

Low pressure will track into the Atlantic from off the Southeast coast tonight into Thursday with increased cloudiness this evening into the overnight hours.
Campaign Corner END_OF_DOCUMENT_TOKEN_TO_BE_REPLACED

Dale Crafts filed his nomination papers for Feb. 21 with the Secretary of State to officially be placed on the primary ballot on June 9, 2020, for the U.S. House of Representatives 2nd District race.
Our Sponsors END_OF_DOCUMENT_TOKEN_TO_BE_REPLACED