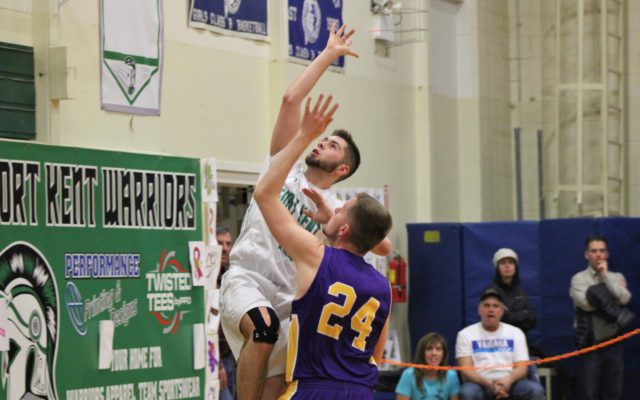 FORT KENT, Maine — With more than half its team composed of seniors, it was only fitting that the Fort Kent Community High School boys basketball team emerged victorious over Woodland during the Warriors final game of the regular season on Saturday.

The Warriors pulled off the senior night win, 72-60, through a true team effort. The usual suspects, the senior trio of starters Jace Rocheleau, Steven Pierce and Eden Paradis scored 49 points between them. Rocheleau was the Warriors highest scorer of the night with 25 points, including two 3-pointers. Pierce had 14 points with one from 3-point land and Paradis pitched in 10 points. Other senior Warriors who found their way to the scoreboard were Kyle Blair with six points and Ian Albert and Riley Alley who each contributed an additional two.

The win brought the Warriors to a regular season 15-2, with its only losses to Class B front-runner Caribou. Fort Kent is the top-ranked team in Class C North, but Central Aroostook is a mere 1.1 points behind in the standings. The two teams played Monday night in Mars Hill.

The Warriors will enter the tournament as either the No. 1 or No. 2 seed, playing their first games in the quarterfinal round either Feb. 18 or 19.

As the Maine Turnpike expects 1 million travelers alone over the Labor Day weekend, policymakers are gearing up for a sprint to solve one of the state’s most intractable problems: a long-standing — and growing — transportation funding gap.
Apex Weather END_OF_DOCUMENT_TOKEN_TO_BE_REPLACED

Low pressure will move towards the Northeast from a low pressure over the Ohio Valley/Pennsylvania region this evening with the primary low tracking into Québec tomorrow.
Campaign Corner END_OF_DOCUMENT_TOKEN_TO_BE_REPLACED

U.S. Senator Angus King (I-Maine) today visited with students at the University of Maine at Fort Kent (UMFK) to discuss his work in Maine and Washington and answer questions from students.
Our Sponsors END_OF_DOCUMENT_TOKEN_TO_BE_REPLACED