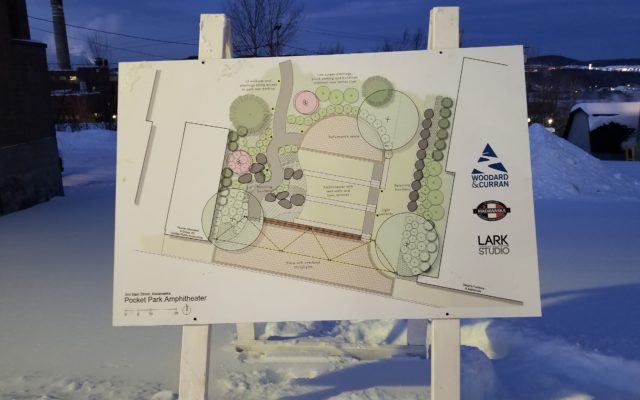 Board of Selectmen to suspend Downtown Revitalization Project to cut costs

Morgan Mitchell • January 31, 2020
In efforts to reduce costs, the Board of Selectmen agreed that the town suspend the Downtown Revitalization Project, pending review of already awarded contracts.

MADAWASKA, Maine — In efforts to reduce costs, selectman Dave Morin recommended — and the rest of the Board of Selectmen agreed — that the town suspend the Downtown Revitalization Project, pending review of already awarded contracts.

After finally establishing a quorum at Thursday’s Board of Selectmen meeting, Morin said he wanted to mention an idea to the board before hearing about the proposed budgets from different departments around town.

Recently, poster boards were put up around town to show the areas for pocket parks and an amphitheatre that would be part of the downtown revitalization project, which was set into motion as early as 2018.

“In light of the fact that we’ve raised the taxes 3 mills this year, moving on with getting these parks built, it seems like not the right time to,” Morin said. “We seem to be making the same mistakes we made 30 years ago.”

While Morin said he was aware that some contracts had already been awarded regarding the project, he still wanted to halt the parks from moving forward.

“Tonight I make a motion to hold these parks — until they are reviewed by this board — because this board will have to face the public,” Morin said. “There are a lot of decisions made by the past board that I personally find questionable.”

Morin motioned to put a hold on the parks, a hold on the contracts and to schedule a meeting and invite the public to give their opinions.

“I feel, I was never involved in any of this decision and I don’t know why it slipped through the cracks that way,” Morin said.

Town manager Gary Picard said that while Morin wasn’t on the board at the time the project was approved, it is still the Board of Selectmen who made the decision to move forward with Downtown Revitalization to begin with.

Morin brought up all the parks that are already owned by the town in the downtown area as well as the farmers market, and said that adding more with the town in this state seemed “extravagant.”

“I’m sure there’s a lot of reasons to put [the park] in — and there’s probably lots of reasons not to put it in — and I think we need one more go around and that’s why I am making a motion tonight to put a hold on the project, schedule a meeting and advertise it for people to come. Because the people have to own the park as well.”

Laurie Gagnon was also adamant about pausing the project to give it another review.

“When this was all decided, we didn’t have a $1.5 million shortfall. We did not raise the mill rate by 3 mills. And I can understand trying to make things busy for the downtown. But in my mind, the best thing we can do for the businesses today is to lower their taxes,” Gagnon said.

The motion was seconded by Gagnon and passed unanimously.

The town administration expense budget is set to reduce by $21,220 from $560,020 to $538,800, due to a reduction in the deferred compensation fund for unfunded liabilities.

The public health and general assistance fund is budgeted to stay the same next year at $23,091.

The municipal building expense budget is going up by $920 from $80,975 to $81,895, partially due to an increase in the software and computer budget.

The most notable increase so far is to the budget of the safety complex building expense. This upcoming budget will more than double due to the need for roof repair and will bring the budget up from $47,940 to $98,399.

Post-tropical cyclone Teddy is expected to cross Nova Scotia today and skirt the western shores of Newfoundland. Maine will experience little moisture from the storm.
Our Sponsors END_OF_DOCUMENT_TOKEN_TO_BE_REPLACED