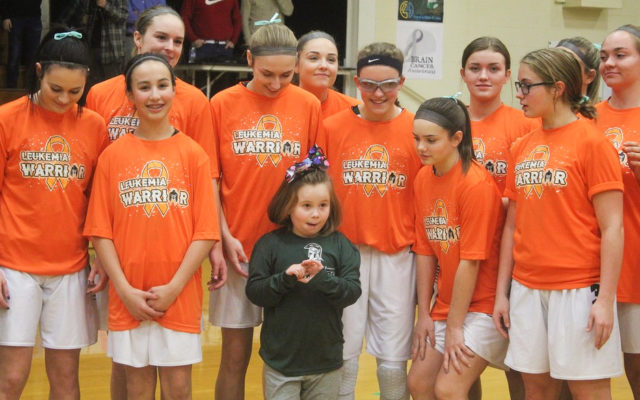 Coaches vs. Cancer basketball games has winners on and off the court

FORT KENT, Maine — There were many winners when the Fort Kent Community High School varsity basketball teams took on Wisdom Middle High School at the annual Coaches Vs. Cancer games on Monday, Jan.13, in Fort Kent.

But not all of the winners were on the basketball court. 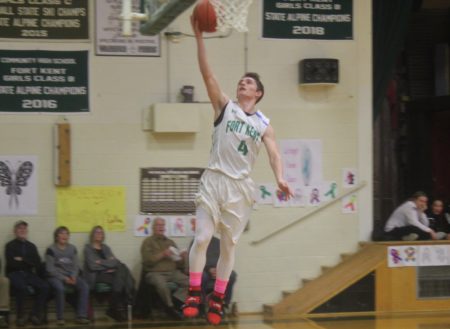 Jace Rocheleau of Fort Kent, as with players from all teams, wore special socks to bring awareness to cancer during a Coaches vs. Cancer fundraiser at Fort Kent Community High School on Monday, Jan. 13. (Jessica Potila | SJVT)

The Coaches vs. Cancer games help bring awareness to the fight against cancer while raising money for the Edgar J. Paradis Cancer Fund. In addition, this year’s games honored two local community members currently fighting against the disease, including 6-year-old Makenna Pelletier of Fort Kent.

Makenna — daughter of Chad and Danielle Pelletier and big sister to Mylee —  was diagnosed with a brain stem tumor just shy of her third birthday. She underwent a year of chemotherapy treatments to shrink the tumor, which unfortunately began growing again in 2018. The young girl, who enjoys singing, dancing and playing with her dolls, then underwent another series of chemotherapy treatments, this time for 15 months.

Doctors are hopeful the tumor will remain in check, although it is possible Makenna may have to undergo further treatments in the future.

“We are honored for the continued support. Bi-weekly trips to Brewer for the past three years have been mentally and financially taxing on our family, and it’s refreshing to see we’re not alone and the community continues to stand behind us,” Chad Pelletier said.

“Makenna is a trooper — always smiling and rolling with the punches with a positive attitude. It makes it a little easier on us as parents when she goes through tests and treatments with ease. We hope and pray she will not need further treatments and be able to resume the life of a normal 6-year-old girl.” 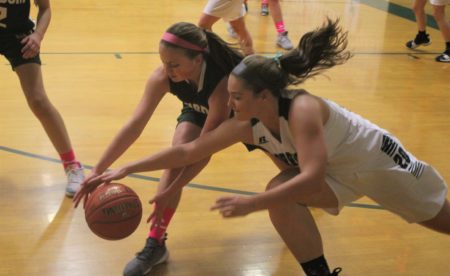 Fort Kent and Wisdom players fought hard for the win during a Coaches vs. Cancer basketball game on Monday, Jan. 13, but it was the community who emerged victorious as a result of the fundraiser. (Jessica Potila | SJVT)

Nilda Marsh, who is battling ovarian cancer, was also honored at the games. Marsh was diagnosed with the disease in 2018 and continues to undergo treatments. She was unable to attend the Coaches vs. Cancer games, but sent a message thanking everyone for their support.

The Fort Kent teams won both matchups with the Warrior girls defeating the Pioneers 38-33.

The Fort Kent boys won its game 70-36. Despite the competitive nature of the game, the Fort Kent crowd cheered on the Wisdom Pioneers as the team made some impressive baskets in the last quarter of the game, including a three-point buzzer beater by Wisdom’s Micque Robertson at the end of the game.

As the Maine Turnpike expects 1 million travelers alone over the Labor Day weekend, policymakers are gearing up for a sprint to solve one of the state’s most intractable problems: a long-standing — and growing — transportation funding gap.
Apex Weather END_OF_DOCUMENT_TOKEN_TO_BE_REPLACED

A cold front moved through the Valley early this morning, and it will be followed by an Arctic cold front this afternoon.
Campaign Corner END_OF_DOCUMENT_TOKEN_TO_BE_REPLACED