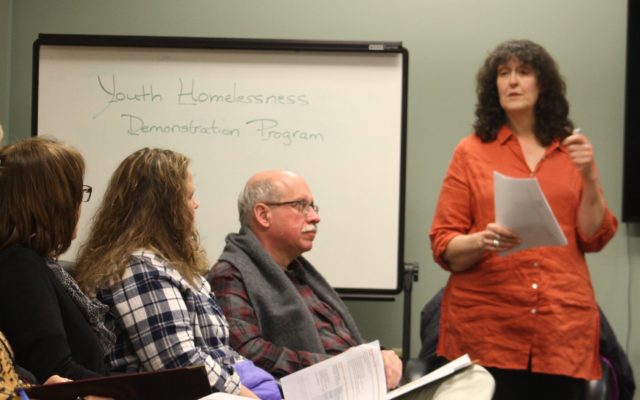 The program, funded by a $3.35 million grant from the U.S. Department of Housing and Urban Development, was created to draft a Coordinated Community Plan to put a stop to youth homelessness across Maine.

Lauren Bustard, senior director of programs at MaineHousing, led the discussion, which dwelled on topics such as the difficulty of gathering statistics on youth homelessness, shelters within The County, and the struggles homeless youth face in the rural and cold environment of northern Maine.

Two groups that came up during the discussion as particularly affected by youth homelessness in The County were those with family members who had substance use disorders and LGBTQ youth.

Bustard said that Aroostook County’s substance use disorder issues, at least from anecdotal evidence, seem to play a substantial role in the number of homeless youth.

“We hear anecdotally from youth that youth become the parents — because the parents are using substances and are unable to parent their children,” Bustard said.

As for LGBTQ youth, many local social workers said the conservative culture of Aroostook County compared to the rest of Maine made LGBTQ youth more likely to end up on the streets.

Bustard said there were higher rates of LGBTQ people than their heterosexual counterparts who are homeless and housing insecure, as well as in the juvenile justice and foster care system, nationwide.

Bustard said that government agencies at every level from local to federal play a role in addressing this vital issue.

She said that many municipalities and community leaders were the ones taking the lead on day-to-day activities in their local communities, including operation of shelters and ensuring that those who are housing insecure have the opportunity to get back on their feet.

At the state levels, agencies such as MaineHousing and initiatives like the Maine Youth Homeless Demonstration Project Team are designing action plans that local communities can utilize for this end. Bustard said much of their work involves working one-on-one with individual communities, and addressing their specific needs.

While HUD does provide policy guidance, she said the primary role they play in Aroostook County is in terms of funding.

Bustard said that it is not always easy to receive a funding source for many of these programs. With access to more resources, the federal level provides a certified funding source not always available elsewhere.

Melanie Bubar, associate executive director of the Sister Mary O’Donnell Homeless Shelter in Presque Isle, said 97 individual people sheltered there in 2019. Twenty-two off those sheltered — 23 percent — were under 18.

As the Maine Turnpike expects 1 million travelers alone over the Labor Day weekend, policymakers are gearing up for a sprint to solve one of the state’s most intractable problems: a long-standing — and growing — transportation funding gap.
Apex Weather END_OF_DOCUMENT_TOKEN_TO_BE_REPLACED

The Valley will receive an inch or less of accumulation from Thursday's system based on current forecast model data.
Our Sponsors END_OF_DOCUMENT_TOKEN_TO_BE_REPLACED