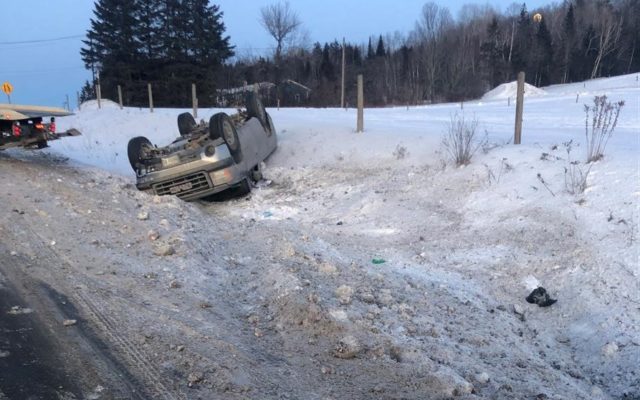 Pickup rolls over after driver attempts to pass ambulance

Jessica Potila, SJVT / FhF Staff Writer • January 14, 2020
The driver of a pickup truck escaped without injury after his vehicle rolled over in a ditch when he attempted to pass an ambulance

FORT KENT, Maine — The driver of a pickup truck escaped without injury after his vehicle rolled over in a ditch when he attempted to pass an ambulance on Thursday, Jan. 9.

Chad Pelletier, 44, of Fort Kent was northbound on Aroostook Road in a 2008 GMC pickup shortly after 3:30 p.m. when he attempted to pass an Ambulance Services Inc. ambulance in the passing lane of the road. The ambulance was traveling at regular speed and its lights were not on, police said.

While attempting to pass the ambulance, Pelletier lost control of his pickup which left the road, struck a ditch and rolled over onto its roof.

Pelletier’s vehicle did not make contact with the ambulance during the encounter and his pickup was towed from the scene.

In an unrelated accident earlier onThursday, shortly before 7:30 a.m. a 1996 Chevrolet passenger vehicle operated by a 17-year-old St. Francis male also wound up in a ditch, although it did not roll over.

The minor was eastbound on Caribou Road when he lost control of the vehicle, which slid into a ditch, causing extensive damage to the vehicle.

The driver was not injured but the car was towed from the scene. Speed and road conditions were factors in this crash, according to Fort Kent Police Chief Tom Pelletier.

As the Maine Turnpike expects 1 million travelers alone over the Labor Day weekend, policymakers are gearing up for a sprint to solve one of the state’s most intractable problems: a long-standing — and growing — transportation funding gap.
Apex Weather END_OF_DOCUMENT_TOKEN_TO_BE_REPLACED

The Valley will receive an inch or less of accumulation from Thursday's system based on current forecast model data.
Our Sponsors END_OF_DOCUMENT_TOKEN_TO_BE_REPLACED