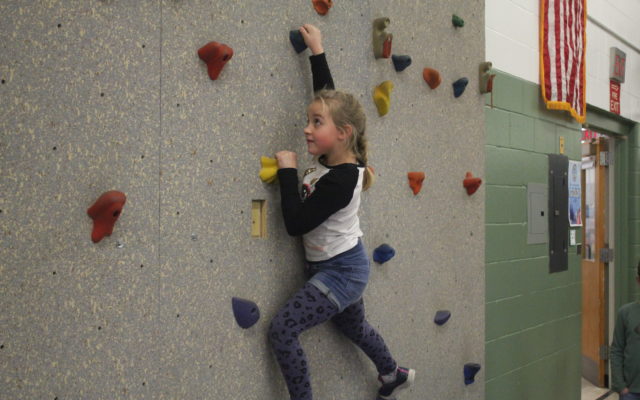 Jessica Potila and Morgan Mitchell, SJVT • January 13, 2020
Dr. Levesque Elementary School in Frenchville and the Fort Kent Elementary School are among two schools from each of Maine’s 16 counties chosen to compete in the annual WinterKids Winter Games program this year.

FORT KENT, Maine —  Dr. Levesque Elementary School in Frenchville and the Fort Kent Elementary School are among two schools from each of Maine’s 16 counties chosen to compete in the annual WinterKids Winter Games program this year. 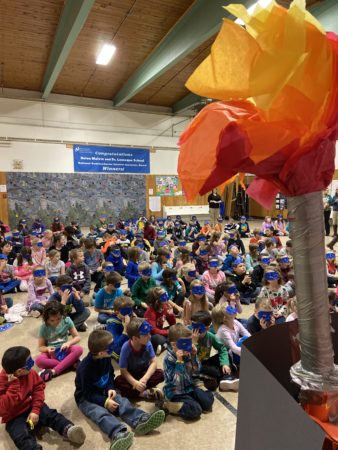 Fort Kent Elementary School is the second biggest school in the competition with 485 students, out of a total of 7,332 statewide.

The WinterKids program encourages healthy physical activity and nutrition education, which students learn during four weeks of games and projects.

“Ideally after this, kids go home after school at night and instead of resting on the couch like they normally do they may say ‘hey, let’s go play outside’,” said Fort Kent principal Robby Nadeau.

“To me, the whole basis of the program is to teach kids winter can be fun and can be enjoyable,” said Dr. Levesque Elementary nurse and organizer for the program at the school, Stephanie Nadeau, who also happens to be Robby Nadeau’s wife.

Dr. Levesque Elementary School in Frenchville kicked off the program with an opening ceremony at the school on Thursday, Jan. 9, when students were able to do a mock torch run and hear from guest speaker Amy Dionne, a local musher.

“She brought in her lead dog and equipment and presented to the kids about her sport,” Stephanie Nadeau said.

At the beginning of the event, each child got a mask and a WinterKids bracelet before a student in a Blue Man suit entered into the cafeteria to the Michael Jackson song “Thriller.”

“Since our theme is #chillerthrillerwinner … it’s cold, that’s our song, and we want to win,” Stephanie Nadeau said.

After the Blue Man entered, the ceremony was officially kicked off with the lighting of the torch, snowflake confetti, blue ribbon wands and dancing.

Week one of the WinterKids competition focused on Outdoor Physical Activity and Science. Nutrition and Math will be the focus of week two. Week three will focus on Family Engagement and Art, and week four will include a Winter Carnival and Technology/Engineering learning projects. 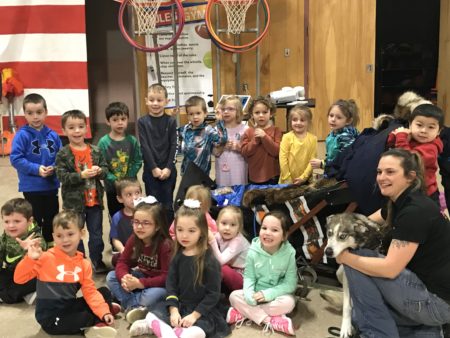 The students each receive weekly prizes.

“The kids have been really excited about coming to school this week,”  Robby Nadeau said on Friday.

There is no cost to the schools to participate in the program as WinterKids provides all necessary supplies. For example, the students will participate in an orienteering activity for which WinterKids supplied them each with their own little compass.

Other activities include relay races and an activity whereby students place black plastic bags provided by WinterKids over snowmen to measure the rate of snowmelt. 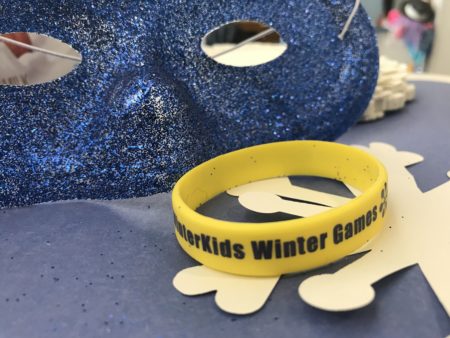 Unfortunately, Mother Nature did not comply with that week one activity as the snow was not sticking together well, but students were still able to learn from the project by instead placing the bags over piles of snow.

“It’s about getting kids active and physically fit during the winter months and to teach them that winter can be a fun time,” Robby Nadeau said.

“It is amazing to see all the smiles and hear all the giggles as they get outside so often and doing lessons with not only teachers but our non-teaching staff get involved as well,” Stephanie Nadeau said. “Our teachers have really stepped up to the plate and embraced this challenge whole-heartedly. Dr. Levesque Elementary School is going for gold.”

Scores will be announced at the end of the program.

An earlier version of this story misspelled Robby Nadeau’s name.

High pressure to the east and and trough to the west will place the region in an area of southerly flow today, which will draw increasingly moist air into the region.
Our Sponsors END_OF_DOCUMENT_TOKEN_TO_BE_REPLACED