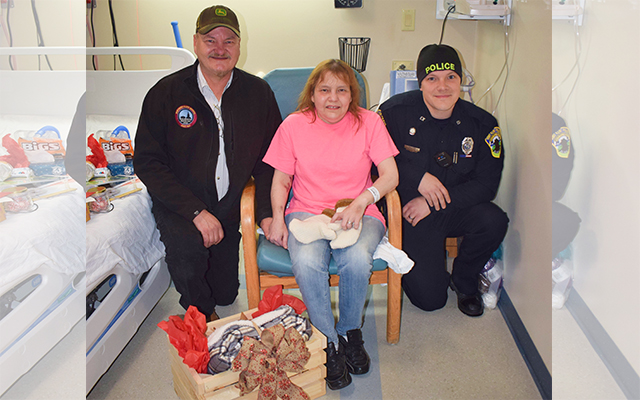 Contributed • January 10, 2020
Receiving a visit from a law enforcement officer can raise eyebrows, especially when it is unexpected. While she was a patient at Northern Maine Medical Center (NMMC), Karen Merriam was the recipient of just such a stopover by an officer, and for a brief moment, wondered with a bit of trepidation about the purpose for the officer’s visit.

FORT KENT, Maine — Receiving a visit from a law enforcement officer can raise eyebrows, especially when it is unexpected. While she was a patient at Northern Maine Medical Center (NMMC), Karen Merriam was the recipient of just such a stopover by an officer, and for a brief moment, wondered with a bit of trepidation about the purpose for the officer’s visit.

She and her husband were soon put at ease when she was informed that she was the recipient of a Christmas crate filled with gifts purchased with money donated by members of the Fort Kent Police Department (FKPD) and several other generous employees and volunteers associated with the town of Fort Kent.

Merriam was undergoing treatment in NMMC’s acute rehabilitation unit at the time of the officer’s visit. On the afternoon of Christmas Eve, FKPD Officer Cole Pelletier paid her a visit, on behalf of the many generous people who contributed to a Christmas gift crate to be presented to a patient at NMMC who would be spending Christmas day in the hospital. Valued at $500, the basket contained items and gift cards purchased from local businesses.

Pelletier said he came up with the idea when he recently walked through the halls of the hospital and he realized that some people do not get to be home on Christmas Day due to an illness or hospitalization. Fortunate himself with the gift of good health, he wanted to do something to make a difference for a patient who is less fortunate.

He began by speaking with Suzie Paradis, Fort Kent’s town manager, about the observation he had made at the hospital. They decided they would speak with co-workers at the police and fire departments, the Fort Kent Firefighters Association, Public Works and town administration to determine if there was an interest in assembling a Christmas crate for a person who was confined to the hospital on Christmas Day. The result was a collection of $500, with an equal amount donated toward the NMMC New Year baby basket, for a total donation of $1,000.

“The wholehearted support by everyone was overwhelming and far surpassed any of my expectations,” said Pelletier.

He said that he hopes this will become an annual tradition to help keep the true meaning of Christmas alive.

Overwhelmed by the selfless gesture, and unable to find the words to express her gratitude, Mrs. Merriam later shared her most sincere thanks to everyone who shared a role in the generous Christmas surprise.

As the Maine Turnpike expects 1 million travelers alone over the Labor Day weekend, policymakers are gearing up for a sprint to solve one of the state’s most intractable problems: a long-standing — and growing — transportation funding gap.
Apex Weather END_OF_DOCUMENT_TOKEN_TO_BE_REPLACED

The Valley will receive an inch or less of accumulation from Thursday's system based on current forecast model data.
Our Sponsors END_OF_DOCUMENT_TOKEN_TO_BE_REPLACED