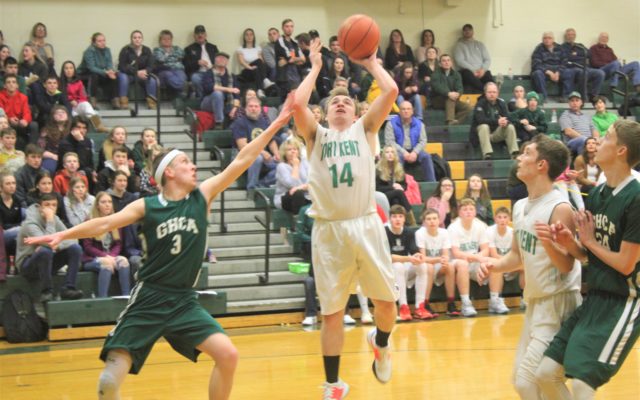 Morgan Mitchell • December 27, 2019
The last week in basketball was an overall success for teams in the St. John Valley.

MADAWASKA, Maine — The last week in basketball was an overall success for teams in the St. John Valley, especially for the boys teams at Van Buren District Secondary School and the Fort Kent Community High School teams.

Fort Kent Community High School hosted a game Dec. 18, against Greater Houlton Christian Academy in which the Fort Kent Warrior boys arose with victory for an end score of 80-55. Eden Paradis helped lead the Fort Kent team to victory with his 23 points scored.

Wisdom High School played at Washburn Dec. 18 where the team also emerged victorious against its host 62-54. Wisdom’s Carter Pelletier scored a total of 29 of those 62 points. Unfortunately, Wisdom girls fell short against Washburn with a final score of 43-28.

Madawaska High School played at Fort Kent Dec. 19, where Fort Kent took the win at 66-34. Some of the game’s top scorers included Fort Kent’s Jace Rocheleau with 18 points and Austin Delisle with 12 points. Madawaska’s top scorers were Carsen Cyr with 11 points and Samuel Dufrense with nine.

The Madawaska girls also fell short in Fort Kent with a final score of 65-24, Fort Kent. Top scorers for Fort Kent were Desirae Hafford, who scored 28 points with 13 points in the second quarter, and Larissa Daigle who scored 16 points. Madawaska’s top scorer was Chantel Ackley with 14 points.

In a close game, Madawaska Varsity boys team won against Katahdin Middle/High School with a 56-52 victory. Ian Beaulieu of Madawaska accounted for 16 of those points and Carsen Cyr, 15.

In an even closer game, the varsity boys teams for Van Buren and Hodgdon went neck and neck until the final buzzer, when Van Buren rose triumphant against its guests with a win of 60-58. The top scorers for Van Buren were Isaiah Morales with 15 points, Luc Perreault and Blake Martin each scoring 14 points, and Henry Hebert scoring 13.

The Madawaska girls varsity team traveled to Fort Fairfield Dec. 23, when it lost dramatically to its host team with a final score of 54-18. The top scorer for Madawaska was Chantel Ackley with 13 points.

As the Maine Turnpike expects 1 million travelers alone over the Labor Day weekend, policymakers are gearing up for a sprint to solve one of the state’s most intractable problems: a long-standing — and growing — transportation funding gap.
Apex Weather END_OF_DOCUMENT_TOKEN_TO_BE_REPLACED

The Valley will receive an inch or less of accumulation from Thursday's system based on current forecast model data.
Our Sponsors END_OF_DOCUMENT_TOKEN_TO_BE_REPLACED