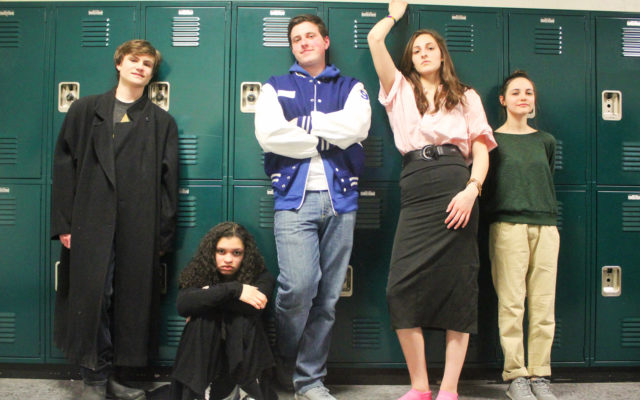 Jessica Potila, SJVT / FhF Staff Writer • December 25, 2019
The following is the first of two articles highlighting some of the top news stories from 2019.

Editor’s Note: The following is the first of two articles highlighting some of the top news stories from 2019. This article highlights events from January to June. The second installment will appear in the Jan. 1 issue.

Selectmen wrote a letter expressing their concerns and wishes to the federal project manager of the proposed new international bridge that will replace the aging span currently connecting Madawaska to Edmundston, New Brunswick. The letter made a plea to the various agencies involved: “Please know that the community, through its leaders, submit these comments recognizing the short and the long-term significance, the magnitude and the impact of this once every hundred-year project.”

Supporters of the Maine chapter of the Make-A-Wish Foundation gathered with friends and relatives of 4-year-old Justine Chenard to tell the youngster born with a heart defect that she would be going to Disney World the following week with her family.

Justine was born with hypoplastic left heart syndrome, a birth defect that affects blood flow to the heart. Justine is a huge fan of Disney princesses, particularly Elsa from the movie “Frozen.”

The state Board of Veterinary Medicine and attorney general’s office fined a local veterinarian accused of diverting drugs and improperly handling animals in her care and placed her on probation for at least five years. Dr. Christiana Yule, who owns and operates Fort Kent Animal Hospital, conceded in a consent agreement filed with the veterinary licensing board on Jan. 16 that on two occasions dating back to 2011 she “handled a canine patient in a rough manner” and that in March 2017 she left the facility while a cat was under anesthesia. Yule did not admit to diverting diazepam or hydrocodone for her personal use, but acknowledged in the agreement that there “would be sufficient evidence for the board to find by a preponderance of the evidence” that she would be subject to discipline.

The Madawaska School Committee appointed Ben Sirois on Jan. 7 to become superintendent of Madawaska schools, and ultimately the Valley Unified Regional Service Center serving communities from Grand Isle to Allagash. Sirois, who is superintendent of MSAD 27 in the Fort Kent area, took over for the three school administrative units in the St. John Valley that have been working together for about three years to combine resources and save money in an effort to address declining enrollments and rising education costs. 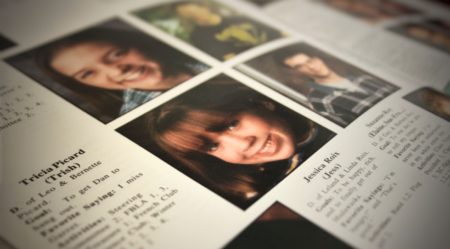 Former Madawaska resident and current White House security staff member Tricia Newbold said she had faced discrimination due to a rare form of dwarfism, and was under temporary suspension for defying authority and for failing to supervise and follow instructions. Newbold, who has a rare form of congenital dwarfism, graduated from Madawaska High School in 1998. Out of the more than 18 years Newbold has held her current position, she said she had been free of discrimination, until February of this year. “This past year and a half with the current supervisor is the first time I’ve ever felt discriminated against, ever. It’s the first time I’ve ever been in a situation where I cannot do my job, which is really an adjustment, especially after having all of the lengthening operations,” she said. Newbold returned to work Feb. 14.

A busload of residents from the St. John Valley visited the new Sanford High School on Feb. 8 for inspiration, tips and guidance as three school administrative units in northern Aroostook consider building their own regional high school and technical center.

In an effort to continue providing public services to area residents, the local volunteer board of trustees of the Fort Kent Public Library officially kicked off a capital fundraiser campaign. The yearlong goal of the trustees was to raise $20,000 locally, a goal they managed to reach by year’s end with the support of local businesses, charitable organizations and members of the community.

The Foreign Language Association of Maine recognized SAD 27 educator Robert Daigle, naming him the 2019 Maine Foreign Language Teacher of the Year. The annual award recognizes those who have achieved outstanding results in teaching modern or classical languages.

Allagash voters, through the successful passage of two articles at their annual town meeting, approved alcohol consumption in local establishments in the town. Prior to the vote, Allagash was one of Maine’s few remaining “dry towns.”

Following a round of interviews, the Valley Unified Board of Directors selected an engineering and architectural firm, WBRC, to assist in the site selection and design of a proposed new regional high school.The board also voted to amend an agreement among the three school administrative units involved with the Valley Unified Regional Service Center to establish guidelines and costs for regional school transportation.

Pelletier Island property owners withdrew their petition to secede from St. Agatha after voter approval of a compromise worked out with town officials. Pelletier Island residents and St. Agatha municipal leaders issued a press release announcing a plan that will have the community include funding in its budget to help pay to maintain the Island Road on Pelletier Island.

The local “Ice Busters” crew celebrated the anniversary of its world record ice carousel, and announced the crew will plan to go bigger in 2020. The Ice Busters team brought a world record to Sinclair last year with the creation of a 22 million pound ice carousel on Long Lake. The group of volunteers used shovels, chainsaws and augers to dig out a 427 foot diameter circle more than two and a half feet thick, and then made it spin, all while raising money for the local Meals on Wheels program. 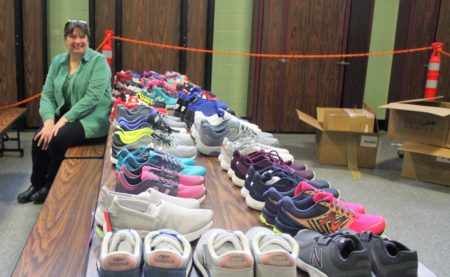 Valley Unified food service director Melanie Lagasse went above and beyond when she wrote a grant and donation letter to New Balance shoe company officials, and as a result obtained 92 new pairs of sneakers to distribute to area students in need. Because of Lagasse’s efforts, New Balance donated $3,680 worth of sneakers for students of all ages.

The 2019 Pride of the Fort Kent Lions Show opened with a faux disclaimer warning of the many side effects that can occur from intense and prolonged laughter. The biannual event raised about $17,000 to support projects in the area this year.

Students in Stacy Belanger’s second-grade class at Fort Kent Elementary School educated, inspired and entertained audiences at the 5th annual Trash to Treasure Fashion Show at the University of Maine at Fort Kent Fox Auditorium. Each year, the students design innovative costumes from disposable materials to honor Earth Day and demonstrate their creativity. They then wear the costumes as they walk the “runway” at Fox Auditorium during two shows consisting of an audience of their peers and another with family, friends and community members.

A representative from WBRC Architects/Engineers met with the Valley Unified Site Selection Committee May 14 to discuss the criteria they will be using when considering the potential location of a new high school. Ray Bolduc from WBRC Architects/Engineers reviewed the site selection criteria matrix that each member of the Site Selection Committee will use to rate potential sites.

A 2015 Fort Kent Community High School graduate, who also graduated from Yale University, embarked on a year-long music fellowship in Israel. Jared Michaud earned a bachelor of arts degree in theater studies as well as a certificate from the education studies scholars program from Yale in May. 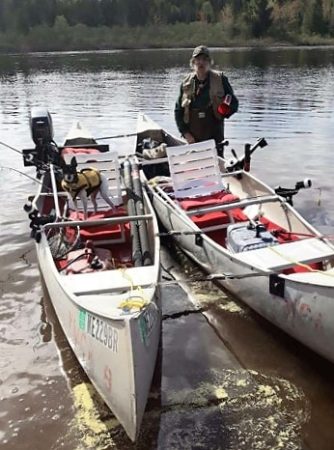 Two brothers and a family pet survived a harrowing ordeal after their canoes toppled over in Umsaskis Lake on Monday, June 3. From left: Cooper the Dog and Michael Fiori. (Courtesy of Michael Fiori)

Two brothers who nearly drowned in Umsaskis Lake along the Allagash Wilderness Waterway Monday evening credited a New Hampshire Scout Troop camping in the area with saving their lives. The men were on day two of a weeklong fishing trip along the Allagash chain of lakes when their canoe toppled. They began swimming for shore but soon became separated. One of the men was headed toward the shore of a remote area known as “Sandy Beach,” where Scouts Crew 345 Kingston, New Hampshire, happened to be camping. The Scouts brought him to their fire where they heated stones and wrapped them in towels to warm him. In the meantime, members of the Scout crew headed for a ranger station to seek further help. Both men survived the ordeal.

Nearly a dozen members of law enforcement turned out in Frenchville for the handoff of the Special Olympics torch for the Madawaska leg of the Law Enforcement Torch Run.

The annual event involving officers in the Valley from Fort Kent to Madawaska raised nearly $1,300 to benefit the Special Olympics.

After heated discussions over a motion to eliminate a majority of proposed sites on the basis of proximity to either Madawaska or Fort Kent, Valley Unified Site Selection Committee members voted down the motion, and instead reached a consensus that the engineering firm would narrow down the options to 11 proposed sites.

A cold front will cross the region today associated with the upper trough and low which will absorb the remnants of Isaias in Canada.
Our Sponsors END_OF_DOCUMENT_TOKEN_TO_BE_REPLACED