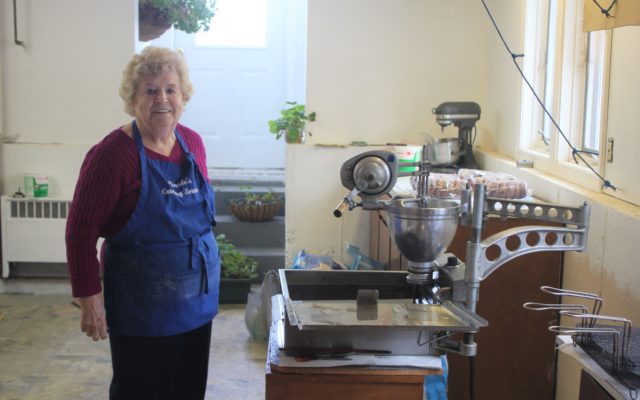 Jessica Potila, SJVT / FhF Staff Writer • December 20, 2019
Popular Plourde’s Donuts will remain in the family as the founder’s granddaughter prepares to take on the business from the grandmother who inspired her love of baking.

FORT KENT, Maine — Popular Plourde’s Donuts will remain in the family as the founder’s granddaughter prepares to take on the business from the grandmother who inspired her love of baking.

As is often the case with the close-knit families in the St. John Valley, Christy Plourde of Fort Kent cared for her grandchildren while their parents were at work.

The time spent under her grandmother’s care left a lasting impression on Jessica Libby — so much so that Libby, 36, is preparing to take over Plourde’s doughnut business.

Libby, who lives in Mapleton, soon will become the proprietor of Plourde’s Donuts, which Plourde began operating more than half a century ago in 1965.

Libby recalls the days of her early childhood when her mother, Sue Corriveau, was working as a teacher in Fort Kent and Libby spent time watching her grandmother prepare the doughnuts, as well as other baked goods, including customized cakes for birthday parties, weddings and graduations. 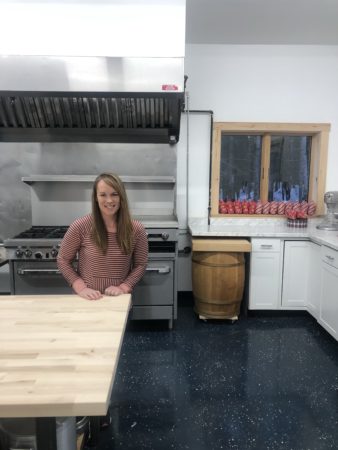 Jessica Libby of Mapleton in her commercial kitchen, Lil J’s Kitchen. Libby will soon take over “Plourde’s Donuts,” which her grandmother founded more than half a century ago. (Jessica Potila | SJVT)

“She had a stool for me which was right next to hers and they were both red and went right up to her countertop. That was my stool to sit on and I’d watch her and she would give me my own frosting bags,” Libby said. “I would frost cool whip covers and make decorations on cool whip covers for my mom. When my mom got home from work that day, I would always have my cool whip covers to show her.”

Plourde, 84, still has the receipt from the fryer and buckets she purchased in October 1965 from her own aunt, Isabel Bouchard, who used to make the doughnuts from her home on Market Street in Fort Kent before moving to Massachusetts.

Bouchard also passed along her doughnut recipe to her niece before moving away.

“She was a Canadian and she was a good cook, too,” Plourde said.

The operation cost Plourde and her late husband, Clarence, $400 in total.

“That was a lot for then. We were pretty poor then,” Plourde said. “We had a big family at that time — seven children and another after. We had the shop in the cellar for awhile.”

The Plourdes began selling the doughnuts at 39 cents for half a dozen.

They were later able to open their own small grocery store on Aroostook Road in Fort Kent, which included the sale of Plourde’s Donuts as well as a catering business. In the meantime, Clarence Plourde helped out with the store while working as a school bus driver for SAD 27.

Although they eventually closed the store, the doughnut business returned to the Plourdes’ home and 54 years later continues to impress.

Plourde will prepare custom orders of the doughnuts, and sell them at craft fairs and at several local retail stores.

The homestyle hand-dropped doughnuts include plain, cinnamon, chocolate and molasses.

“I have people that really like them — especially people that were away. When they come back on vacation, they insist that their parents come get some doughnuts,” Plourde said.

Every Thursday, Christy Plourde delivers her doughnuts to be sold at Lake Road Grocery in Wallagrass, and at Gas and Go and John’s Shurfine in Fort Kent.

“I have many memories of Plourde’s Donuts,” said John’s co-owner Jessica Audibert. “As a kid I was brought up right down the road from the original store. I remember the smell of fresh doughnuts and other baking upon walking in.”

“We can’t keep them on the shelf,” Audibert said. “They pretty much sell out the day they come in.”

Plourde shared what she feels is the appeal of the doughnuts. 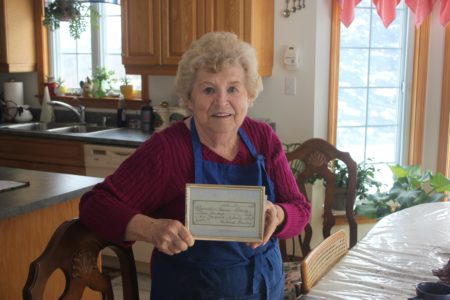 Plourde’s Donuts owner Christy Plourde still has the bill of sale from when she purchased equipment from her aunt to start up the business more than half a century ago. (Jessica Potila | SJVT)

“They have fresh buttermilk, fresh eggs so that’s what makes the doughnuts. There’s nothing artificial in them,” she said.

Plourde said she is ready to pass the reins of her business on to her granddaughter.

“We’ve been talking about it for a long time,” Plourde said. “She’s a very good cook.”

Libby is set to open her own business in Mapleton, Lil J’s Kitchen, which her father largely built and which includes commercial stoves and ovens, a walk-in cooler and three-bay sink.

There, Libby plans to bake breads and desserts and ultimately go into the catering business as her grandmother once did, making home-cooked meals.

She will also make her grandmother’s famous doughnuts beginning next week.

“I’m taking over her fryer and the cutter for the doughnuts and then what I learned last week making doughnuts with her is that her sifter that she uses for her flour was her mother’s. She intends to give that to me so that is pretty cool,” Libby said.

With a legacy of eight children, 17 grandchildren and 13 great-grandchildren, Plourde said she will have no problem enjoying her time once Libby takes over the family doughnut business.

“I think it’s time. I’ll do more relaxing,” Plourde said. “I’ll spend some more time reading and I love quilting. I do a lot of quilting. I have a big family I can give them to.”

Plourde also travels regularly to visit family members who live downstate and out of state, and is looking forward to an upcoming trip to Florida to attend her granddaughter’s high school graduation.

Libby recalls a childhood spent with a grandmother who is skilled at cooking, baking, crafting and gardening, and who still has the energy to accomplish whatever she sets her mind to.

“She can do anything. It’s amazing what she can get done. My grandmother is a pretty special person and can do a lot of things,” Libby said. “She’s very creative and very talented and I just hope I can follow in her footsteps and be as good as she is.”

As election season winds down to its final stretch, candidates are raising money to fund their campaigns, hoping to prevail in the Nov. 3 election, which has already seen millions of Americans cast their ballots in early and absentee balloting.
Apex Weather END_OF_DOCUMENT_TOKEN_TO_BE_REPLACED

Low pressure that produced yesterday's Nor'easter will continue to move away from the region in the Maritimes. A large upper-level low associated with the system will move east across the region today.
Our Sponsors END_OF_DOCUMENT_TOKEN_TO_BE_REPLACED