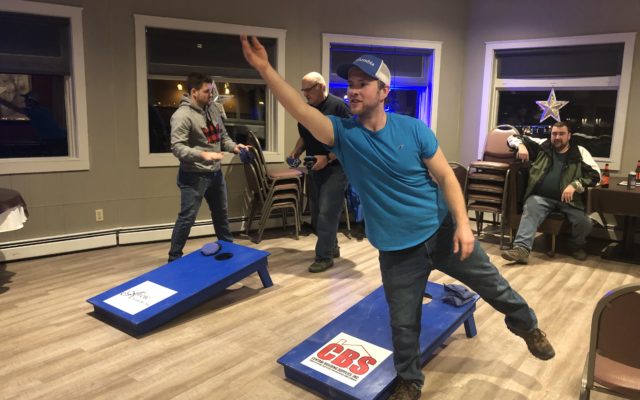 Morgan Mitchell • December 12, 2019
Cornhole has returned to the Valley with a semi-permanent home at Route 1 BBQ in Madawaska.

MADAWASKA, Maine — Cornhole has returned to the Valley with a semi-permanent home at Route 1 BBQ in Madawaska.

Economic Development Director Keith Cyr said he and Recreation Department Director Sam Cyr were approached by a few citizens in the fall asking if there was a way to continue the pastime in the winter months.

Cornhole is a game in which two plywood boards with a hole cut out are propped up at an angle facing each other. Players toss a bag filled with corn or beans from one side to the other to get the bag in the hole of the opposite game board.

“Since cornhole is a game that can be played by pretty much anyone, we figure it’s a great way to get people together to play, and enjoy some great food and beverages,” Keith Cyr said.

Keith Cyr procured the materials from Central Building Supply in Madawaska and got sponsors to chip in on the project. After he had the boards made, he painted them himself. The Madawaska Recreation Department now has 10 sets of cornhole boards.

Shortly after Sam Cyr was hired, the town reached out to Route 1 BBQ where the restaurant has enough space inside to accommodate the game. Last week was the first week the restaurant hosted the game and about 10 people showed up to play.

“I think it’s unique because it isn’t an event just for kids, or adults, or young adults,” Sam Cyr said. “Anyone can play this game, and it’s surprising how people get good after trying it a few times.”

The event is free to the public and will be held every Wednesday from 6 to 8 p.m. at Route 1 BBQ.

“Besides some friendly competition, it’s a great place to be social with other people in the community, along with supporting a new local business,” Sam Cyr said.

A cold front will cross the region today associated with the upper trough and low which will absorb the remnants of Isaias in Canada.
Our Sponsors END_OF_DOCUMENT_TOKEN_TO_BE_REPLACED