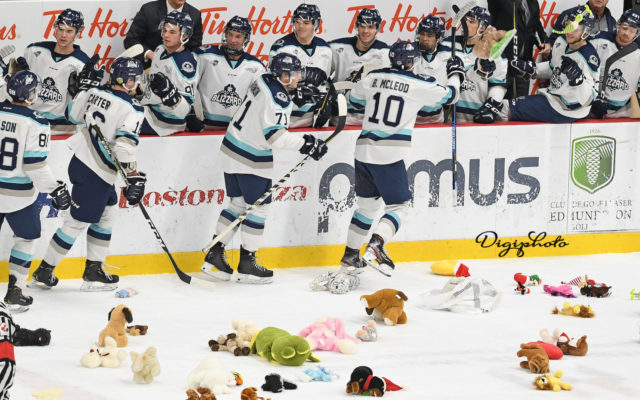 Contributed • December 11, 2019
Though a shootout round was required to declare the Summerside Western Capitals the winner over the Edmundston Blizzard on Dec. 8, it was the teddy bears that stole the show.

EDMUNDSTON, New Brunswick — Though a shootout round was required to declare the Summerside Western Capitals the winner over the Edmundston Blizzard on Dec. 8, it was the teddy bears that stole the show.

In the shootout round, the MHL-leading Western Capitals won 3-2 after erasing a deficit of 2-0 to start the third period. And as it is usually the case in meetings between the two teams, roughness was at the rendezvous, which complicated the work of the officials.

The crowd of 2,718 spectators went wild when the Blizzard’s Brock McLeod found the back of the net at 8:49 of the first period to open the score. Fans flooded the ice with hundreds and hundreds of teddy bears and plush animals in the promotion game. Fans had been invited to bring plush toys and throw them on the ice after the Blizzard’s first goal of the game. The toys were packed in trucks to go to various organizations to give to children in need.

In further game action, at 15:05, Ben Lightbody scored his first goal of the campaign on a shorthanded breakaway to give the Blizzard a 2-0 lead which remained intact until the beginning of the third frame.The game displayed the great talent of goalkeeper Antoine Lyonnais who put on a spectacular show, certainly one of the best performances by a Blizzard goaltender since the team’s transfer from Dieppe in 2017. Not one, but several miraculous saves by Lyonnais who stunned the powerful offensive of the Capitals, ranked 7th in Canada.

After many tries, however, they managed to solve Lyonnais’ mystery. Brodie MacArthur, who else, scored twice for the Capitals in the third period, first at 1:06 on the power play and at 12:47. MacArthur has 30 goals to his credit since the beginning of the season. He brought his point total to 56 just like his linemate, giant Kallum Muirhead.

The Blizzard had a few chances to close the books in the overtime period. Tristan Mercure came close by hitting the crossbar.

In the shootout, the Blizzard took a 1-0 lead thanks to Brock McLeod’s remarkable goal that mystified goalkeeper Alec MacVicar with some brilliant moves. But the visitors scored in the next two rounds (Marc-André LeCouffe and Kallum Muirhead) to leave Edmundston with the two precious points.

On their last visit at the Jean-Daigle Centre on November 17, the Western Capitals played the same trick to the Blizzard by registering a 5-4 shootout win.

Only one member of Maine’s congressional delegation had come out in favor of impeaching President Donald Trump ahead of House Speaker Nancy Pelosi’s Tuesday announcement that the Democratic-led House of Representatives would begin an impeachment inquiry.
Apex Weather END_OF_DOCUMENT_TOKEN_TO_BE_REPLACED

A strong upper-ridge anchored off the Southeastern US coast will bring warmer and more humid than normal conditions to the Valley through the late week period.
Campaign Corner END_OF_DOCUMENT_TOKEN_TO_BE_REPLACED

Dale Crafts filed his nomination papers for Feb. 21 with the Secretary of State to officially be placed on the primary ballot on June 9, 2020, for the U.S. House of Representatives 2nd District race.
Our Sponsors END_OF_DOCUMENT_TOKEN_TO_BE_REPLACED