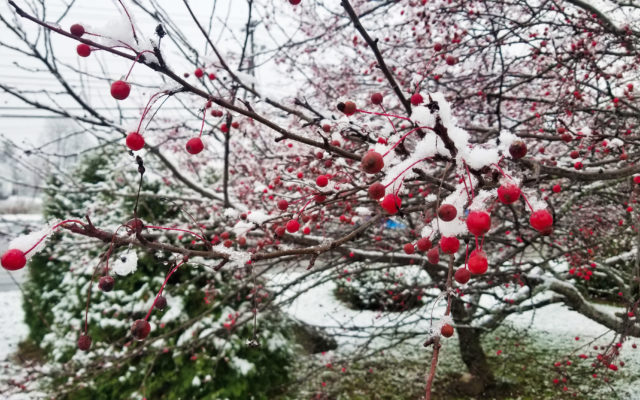 CARIBOU, Maine — When the snow started falling early last month, Christine Hagan of Caribou hoped that it would be a good sign.

“I felt like maybe that it would snow early like it does some years, and then the weather sort of gets it all out of its system, and then we really wouldn’t see the big storms until after Christmas,” she said Thursday. “Obviously, I laugh at that idea now.”

While snowfall for the month was above average in much of the state, particularly north of Bangor up to the St. John Valley,

November was near average in terms of precipitation, according to the National Weather Service in Caribou.

Snowfall was above average, mainly in the northern part of the state.

Temperatures were three to four degrees below average.

The month got off to a record warm start early on Nov. 1, when the temperature reached 68 degrees in Caribou. This tied the all-time record warm temperature for the month last set on Nov. 1, 1956. Temperatures fell sharply during the day, and below average temperatures were recorded from late on Nov. 1 through much of the time until Nov. 18.

A cold snap Nov. 12 through Nov. 18 produced well below average temperatures and included a low of 1 degree below zero on Nov. 17 in Caribou.

This was the earliest date that the temperatures have dropped below zero in Caribou since weather records began being kept in 1939.

Temperatures were more moderate relative to averages from Nov. 19 through the end of the month, with varying spells of slightly below and above average temperatures.

The first snowfall of the season occurred on Nov. 7, with most of northern and eastern Maine receiving an inch or less. An area around Houlton received 5 inches of snow, however, and 2-4 inches was common in southeast Aroostook and into northern Washington and northern Penobscot counties.

A larger winter storm blew threw on Nov. 11-12, dropping up to a foot of snow in the St. John Valley and 4-8 inches of snow in most areas from Millinocket north.

A storm on Nov. 19 produced between 4 and 7 inches of snow across the St. John Valley and far northeast Maine.

On Nov. 24-25, a storm dropped between 3 and 10 inches of snow north of Millinocket, with the highest totals to the west of Caribou and Presque Isle.

A final storm on Nov. 27-28 produced up to a foot of snow in southeast Aroostook County with 4-8 inch amounts common to the north of Bangor. There was a sharp cutoff, with less than an inch of snow to the north of Presque Isle.

In Caribou, a total of 33.2 inches has fallen this winter, which is a bit behind last year’s 35.8 inches. It is well above the normal amount of 14.8 inches typically on the ground by this date. Bangor has 5.5 inches of snow on the ground.

As the Maine Turnpike expects 1 million travelers alone over the Labor Day weekend, policymakers are gearing up for a sprint to solve one of the state’s most intractable problems: a long-standing — and growing — transportation funding gap.
Apex Weather END_OF_DOCUMENT_TOKEN_TO_BE_REPLACED

Mostly cloudy skies will develop after midnight as a warm front moves across the area with some snow flurries possible overnight.
Our Sponsors END_OF_DOCUMENT_TOKEN_TO_BE_REPLACED